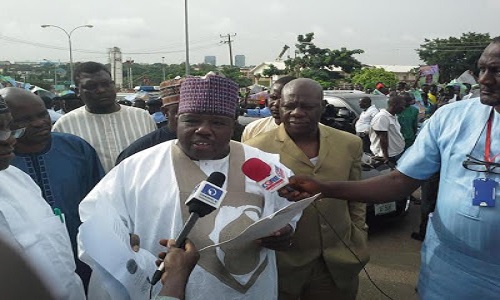 The embattled National Chairman of the Peoples Democratic Party (PDP), Ali Modu Sheriff, has vowed to remain in office until the Court of Appeal’s decision on the position.

Mr. Sheriff made this known on Monday in Abuja while reacting to the judgment of a Federal High Court in Port Harcourt, Rivers State which upheld his removal as chairman during the May 21, 2016 National Convention of the party.

The court also declared that the dissolution of the National Working Committee and the National Executive Committee (NEC) by that convention was valid.

In the judgment, Justice Abdullahi Liman declared that the appointment of the Ahmed Makarfi-led caretaker committee to oversee the party’s affairs was legal and in line with the provisions of the PDP Constitution.

According to Justice Liman, Article 31 (1) of the PDP Constitution vested the powers to convene a national convention on the NEC of the party.

Sheriff, however, told newsmen that he had instructed his lawyers to appeal the Port Harcourt judgment and to seek a stay-of-execution of the said judgment.

“The court where the judge gave judgment in Abuja last week and the Federal High Court in Lagos and today’s court in Port Harcourt are all courts of the same competent jurisdiction.

“Therefore, the orders that we have in Abuja is still subsisting. What it means is that unless a Court of Appeal decides otherwise, I still remain the national chairman of the PDP.

“Courts that are of the same jurisdiction cannot overrule another court unless it is Court of Appeal. We disagree with today’s judgment completely”, the disputed chairman said.

The former Borno State governor noted that his lawyers have been directed to immediately file an appeal and also ask the same court for stay of execution, because of the existence of three subsisting orders given by courts of the same coordinate jurisdiction.

“Unless and until Court of Appeal, which is a higher court, makes a pronouncement contrary to what we have, I still remain the chairman”, Mr. Sheriff asserted.