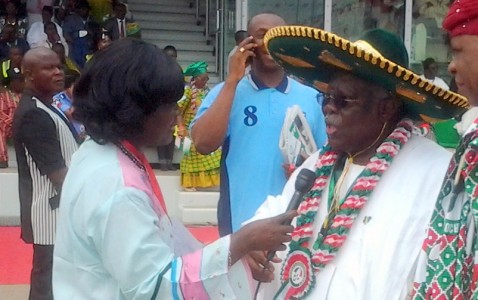 The Lagos State executives of the People’s Democratic Party (PDP), on Wednesday declared their support for a former Deputy National Chairman of the party, Olabode George, to be the party’s national chairman.

The State Chairman of the PDP, Moshood Salvador, made the declaration at a news conference on the forthcoming national convention at the party’s secretariat in Ikeja, Lagos.

The Ahmed Markafi led-Caretaker Committee had zoned the national chairmanship position to the South and the Presidency to the North.

It also fixed Aug. 11 for the National Convention.

Mr. Salvador said, “The overall successes of the PDP Local Government, State, National Assembly and 2019 Presidential elections are predicated upon the perfect organisation and repositioning of the party.

“One of the most important aspects of which is the proper and excellent restructuring of the party’s organs; the wards, from the local government to the national level.

“We support and appreciate the efforts of the Markarfi Caretaker Committee; we also appreciate the work done by the zoning committee”, Salvador said.

The PDP boss said there was need to zone the office of the national chairman of the party to the South-West specifically.

“We therefore, urge the Southern governors to quickly further zone the offices for the South to the various geo-political zones within the South”, he said.

The PDP boss said that the zonal leaders would further zone the zonal offices to various states within the zone”.

He explained that the zoning would create the right template for a complete transition process and programme for the forthcoming PDP national convention as the party could not afford crisis.

Mr. Salvador said the party dearly and importantly needed a very groomed and seasoned politician of national experience to become the national chairman.

He said, “This is why the party needs a chairman with uninterrupted PDP membership since 1999 with 100 per cent loyalty”.

He added that there was need for “a national chairman with records of achievements in the party as well as one that knows the culture, ideologies and foundation of the party”.

He added that Mr. George had all it takes to paddle the canoe of the party to administrative and electioneering success, irrespective of his age.

Mr. Salvador appealed to all other South West states to give their support to the declaration.

He also called on the remaining five geo-political zones in Nigeria to follow in their declaration to make Mr. George the National Chairman of the party.

Mr. Salvador said it was absolutely necessary to get the best and matured hand for the party.

In an interview with NAN, Mr. George said that he felt honoured to be endorsed as the national chairman of the party.

“I feel okay about the declaration. It is like trying to be honoured in my hometown. With the state of the party, the party requires an experienced hand at this point to take us to the Promised Land.

“This is not the time for ‘Johnny Just Join’. I look at it like we are on board a ship in a stormy water.

“So we need the best hand to take us out of the storm.

“To me, it is a call to service and they can tap into one’s experience and by God’s grace, we will get ourselves back to the level at which the party can get back to where it was”, George said.

He, therefore, urged members to be committed, dedicated and disciplined in order to achieve the main aim of going back to its past glory.

If he eventually heeds the call and throws his hat in the ring for the highly coveted seat, Mr. George will have to stave off opposition from former Ogun State Governor, Otunba Gbenga Daniel and a former governorship candidate of the party in Lagos State, Jimi Agbaje, who have both been endorsed for the position by the PDP New Era group and PDP power brokers respectively.