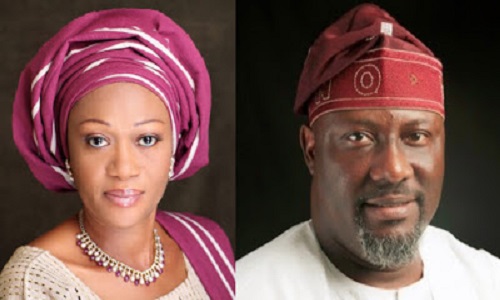 Senator Melaye had reportedly used expletives and denigrating words on Senator Tinubu during an executive session of the upper legislative chamber on Tuesday.

Although the session was not open to journalists, multiple sources confirmed that the Kogi senator not only hurled abusive words that were demeaning to the womenfolk, he threatened to physically assault her.

While the alleged victim in this case, Mrs. Tinubu, wife of the APC national leader, has yet to issue a statement, her alleged aggressor, Melaye, who has a history of physically abusing women, denied the allegations in its entirety, saying “I only cautioned her for mentioning my name in her presentation during the closed session”.

However, his feeble defence was rubbished by the Lagos senators, including Olugbenga Ashafa (APC, Lagos East) and Solomon Olamilekan Adeola (APC, Lagos West), who expressed their willingness to testify in court against Melaye.

In a statement jointly issued by the senators on Wednesday, they said: “We dissociate ourselves from the comments and behavior of Senator Dino Melaye (APC, Kogi West) at the Executive Session of 12th July, 2016 as we represent people known for finer character and noble culture of social interaction.

“We equally state that we will be part of efforts to instill and enshrine decorum and gentlemanly conduct associated with the Upper Chamber of the National Assembly of the Federal Republic of Nigeria.

“While condemning the use of any vulgar and un-senatorial language in all ramifications, we particularly take offense to the use of such abusive and denigrating words against the person of distinguished Senator Oluremi Tinubu (APC- Lagos Central).

“Such words greatly demeaned the female gender and the hallowed chamber of the Senate”.