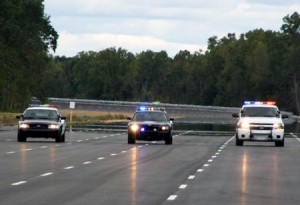 There have been reports that a man led a police car chase in the US due to boredom.

The 30 year-old man had no warrants or prior convictions and had a valid driver’s license when he took off through an intersection near Olympia late Saturday.

After speeding off, a sheriff’s deputy tried to pull him over. The suspect did not comply.

The pursuit lasted over an hour and crossed two counties before the suspect hit a fence and was apprehended.

Sheriff’s officials say there was no evidence that the driver was impaired by drugs or alcohol.

Sgt. Dave Odegaard says the man appears to have instigated the pursuit for fun. The suspect has been charged with three counts of attempting to elude a police vehicle.