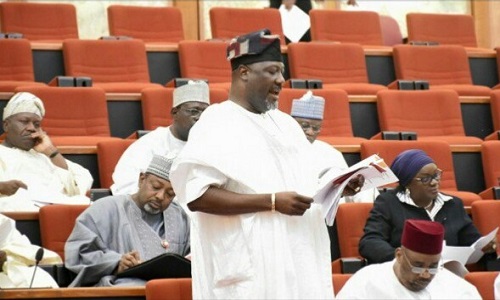 The senator representing Kogi West District on platform of the All Progressives Congress, APC, Dino Melaye, on Wednesday morning said reports that he was planning to initiate impeachment proceeding against President Muhammadu Buhari were not true.

Melaye, who is chairman of the Senate Committee on Federal Capital Territory, said the “falsehood” emanated from those who have vowed that Nigeria will cease to exist unless they were in power.

He made the remarks in a statement he signed and distributed earlier today in Abuja.

We had reported that senators loyal to Senate President Bukola Saraki and his deputy, Ike Ekweremadu, during an Executive session of the upper legislative chamber yesterday, threatened to impeach the president over the Senate rules forgery case.

While the report did not mention Melaye as championing the impeachment threat, it quoted sources as claiming that the Kogi senator hurled invectives at one of his colleagues and wife of the APC national leader, Senator Oluremi Tinubu.

Sen. Melaye, however, said the reports were a “narrative of the attack dogs of demagogues who have decided to turn Nigeria upside down for failing to choose leaders for senators”.

“It is pertinent to note that the incredulously machinated misinformation was orchestrated by forces bent on destabilising the upper chambers of the Nigerian Parliament for selfish reasons.

“One of the mushroom and faceless online platforms used to promote the ill-fated and calumnious write-up has been notorious for serving as the propagandist machinery of political commercialists who are pushing for the extension of their fiefdom to the National Assembly”, he added.

Mr. Melaye, however, decried the manner in which the legislative arm of government is being treated, saying the National Assembly should be given a free hand to carry out its difficult responsibilities.

“While I remain unimpeachably committed to the leadership of the Senate, I believe the respected arm of government charged with the onerous responsibility of lawmaking should be given the independence to conduct its business.

“I am a responsible Nigerian, role model and a champion of anti-corruption and equity which my party (APC) stands for. I therefore urge the general public to discountenance the libellous publication as I will continue to respect the history, culture and excellence of my Kogi West people on the floor of the Senate. The true threat to the current republic are those who believe that a Nigeria that is not led by them must not exist”, Mr. Melaye said.