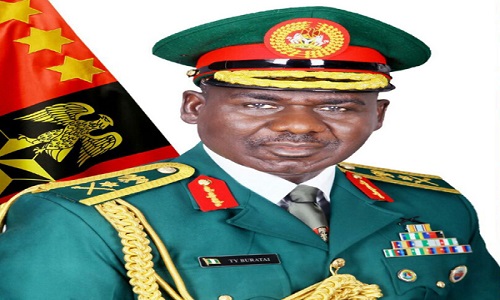 The Chief of Army Staff, Lt.-Gen. Tukur Buratai, has assured that the military will restore full peace to the North East in line with the desire of President Muhammadu Buhari.

He charged the troops to sustain the momentum of ongoing counter insurgency operations to flush out the insurgents.

According to him, “Operation Lafia Dole has entered a critical stage. You must sustain the momentum; there is no going back

“There is no time to waste. We want full restoration of peace in the North East. That is what the president wants”, the chief of army staff said.

Buratai later told newsmen that he was in Buni Yadi to see how the troops undergoing the Special Forces training were faring.

He explained that the exercise was to make the personnel resilient and be able to withstand challenges they might face in the course of the ongoing operations.

Buratai also explained that the school was relocated from Niger state to Buni Yadi in view of the strategic location of the town in the fight against the Boko Haram insurgents.

“We know the importance of this place – Buni Yadi. This is the route they (insurgents) passed through to other parts of the North East and even Plateau in the North Central.

“It is better for us to have dominated and taken over the place”, he said, and assured the troops of their welfare and logistics need, including required equipment to prosecute the war.

The News Agency of Nigeria (NAN), reports that Buni Yadi is the headquarter of the 27 Task Force Brigade of the Nigeria Army.

It will be recalled that Buratai had charged the military to remain focused until the insurgents were crushed, when he spoke at the end of a three-day “Combat Support Arms Training Week 2016” in Maiduguri, on Wednesday.