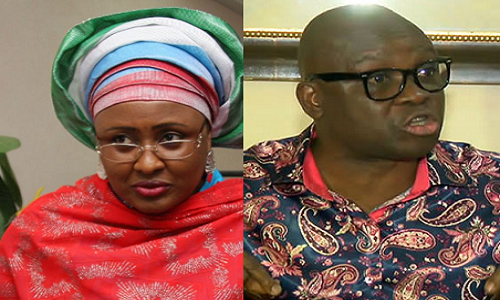 The scuffle between the wife of the president, Mrs Aisha Buhari, and Governor Ayodele Fayose has taken a new twist on Wednesday, as Mrs Buhari opened a court case against the Ekiti State Governor, for claiming she was involved in the Halliburton scandal.

It would be recalled that the governor had in June stated that Mrs. Buhari was the “Aisha Buhari” named in a U.S. court document, alleged to have been involved in bribery case involving a convicted former U.S. lawmaker, Williams Jefferson.

Fayose, mistakenly referred to the Jefferson bribery as the Halliburton scandal, which is an entirely different case, He however, still affirmed that he was right, despite Mrs. Buhari’s denial and threat of lawsuit.

According to PREMIUM TIMES, Mrs Buhari filed the case on July 20, 2016, where she prayed the Federal High Court sitting in Abuja to grant her reliefs to issue writ of summons against Mr. Fayose and his media advisers, Idowu Adelusi and Lere Olayinka.

The presiding judge, Olukayode Adeniyi, granted all reliefs sought by wife of the president including an order of substituted service.

Mary Ekpere, counsel to Mrs. Buhari, prayed the court for the lawsuit to be served on Mr. Fayose and his two aides, even though Ekiti State is outside the jurisdiction of the Abuja Division of the FHC.

Mrs Buhari had earlier in a letter written to the governor dated June 23, demanding withdrawal, where she maintained that the allegation of her involvement in the scandal as “very wild and unfounded”.