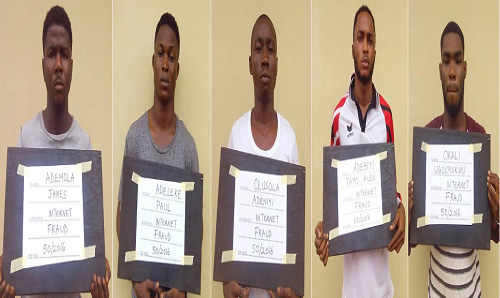 The Federal University of Technology Akure (FUTA) has suspended four students of the institution, who were arrested last Friday by the Economic and Financial Crimes Commission (EFCC) for alleged N16 million Internet fraud, indefinitely.

The EFCC had arrested the affected four suspects and another from Adekunle Ajasin University, Akungba (AAUA) after intelligence gathering at an off-campus residence in Akure, the Ondo State capital.

A statement by the Head, Information and Protocol Unit of FUTA, Mr. Adegbenro Adebanjo, said the students, whose indefinite suspension was approved by the university’s vice chancellor, are to stay away from the school until further notice.

“In a letter conveying the suspension, the university said the vice chancellor approved the sanction based on the extant rules, which stipulate indefinite suspension for students arrested and being investigated for allegation of criminal activities.

“This is in accordance with the provisions of the university Handbook of Information 2012-2015 Page 54, paragraph 5(i) which states that, ‘Whenever a student is being investigated for a criminal offence by the Police or is charged with a criminal offence; whether or not connected with the university; the student shall be suspended from his studentship until he/she is cleared of the allegation/charge’”, the statement read.