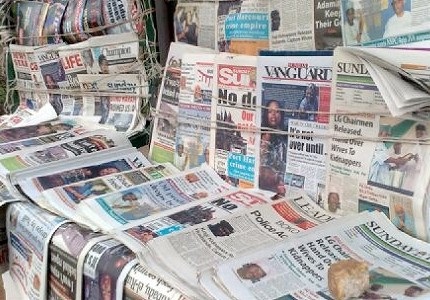 Ghanaian President, John Mahama, on Wednesday said the delay in the delivery of the crude oil ordered from Nigeria had created power generation problems for his country, leading to outages in many parts.

EDO State Governor Ad­ams Oshiomhole, has at­tributed the crisis rocking the Peoples Democratic Party (PDP) to God’s ven­geance on the party’s al­leged destruction of the country.

The embattled Abia State Governor, Dr. Okezie Ikpeazu, has appealed the judgment of the Federal High Court, Abuja, which removed him as the state governor for not paying his taxes and forgery of his tax clearance certificate.

President Muhammadu Buhari on Wednesday pleaded with Niger Delta militants to “give Nigeria a chance”, vowing to keep the country intact despite widespread ethnic and religious divisions that threaten unity.

The Peoples Democratic Party (PDP) has called on Nigerians to use the occasion of the Eid-el-Fitr‎ to pray for peace and unity of the nation and eschew actions that will divide country.

Following the prediction by Nigerian Meteorological Agency (NIMET), that high level of flood will occur in Lagos, Oyo and Ogun State this year, the 3 states as well as others in South West zone said they have begun emergency preparation and response against the looming flood disaster.

Justice Ibrahim Buba of the Federal High Court in Lagos has adjourned the arraignment of 16 bank officials charged with N2.6 billion fraud till October 13.