As the economic down­turn and recession continue to bite hard­er with prices of goods, espe­cially food items rising dai­ly, Nigerians have called on the Nigeria Customs Service (NCS) to lift the ban on im­portation of rice through the land borders to ease the cur­rent hardship. 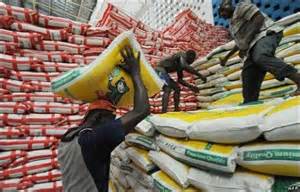 A market survey indicat­ed a sharp increase in the price of rice as a bag now sells between N17,000.00 and N18,000.00 from N9,000.00 and N10,000.00 last year.
In separate interviews, some residents of the Federal Capital Territory (FCT), Abu­ja, appealed to NCS re-con­sider the ban because rice re­mains one of the stable foods Nigerians eat and that the high cost of purchasing it has further affected their well-be­ing negatively.
“Rice has become gold, one mudu now sells at N500, you have not talk of the ingre­dients to cook it. This is too much suffer, let Customs lift the ban on rice importation through the lands borders, we are suffering, most families cannot afford this increase,” Mrs. Betty Okoro, a primary school teacher lamented.
Another resident, Mr. Bisi Adegboyega, who works in a private firm, urged NCS to think of the plight of the aver­age Nigerians and lift the ban.
“There is no food, nothing is working, yet the prices of food and goods are sky-rock­eting, only the rich now afford rice, Customs should not just think of revenue for govern­ment alone, but what people go through daily to eat rice. I want the policy to be re-vis­ited because it has made liv­ing more difficult,” he posited.
Also speaking, another re­spondent, who gave his name as Abubakar and works as a civil servant spoke in the same vein.
He argued the need for Customs to revise the policy since it has further impover­ished Nigerians.
“In an era when salaries are being owed workers, Customs placed a ban on rice through land borders, everyday, we hear of seizures and Nigerians are groaning buying a mudu of rice at N500. How do they want us to survive?” He que­ried.
It would be recalled that the Sultan of Sokoto, Al­haji Sa’ad Abubakar III, had urged Customs to consider lifting the ban on rice impor­tation through the land bor­ders when the Comptroller-General of the Service, Col. Hameed Ali (retd), visited him in his palace in Sokoto.
”The policy should be re­visited with a view to make amends and ameliorate the suffering of Nigerians.
“There is no food in the country hence the need for the borders to be reopened for rice importation,” he was quoted as saying.
The sultan had said that he had been receiving “cries’’ from the masses on their plight over hardship in the land, and appealed to the ser­vice to address the issue ur­gently
NCS had re-introduced the restriction order across the country in March, 2016.
Comptroller-General of Customs, Col. Hameed Ali (Retd) gave the approval for the reversal of an earlier poli­cy in October 2015 which al­lowed rice imports through the land borders, once ap­propriate duty and charges were paid.
NCS spokesperson, Wale Adeniyi, had said that at a re­view session with comptrol­lers of border commands and FOUs held in Abuja, the ser­vice noted that dwindling revenue from rice imports through the land borders do not match the volume rice landed in neighboring ports. Rather, reports from bor­der commands indicated an upsurge in the tempo of rice smuggling.
He had noted that imple­mentation of the restriction order got off to a smooth start, with a high level of compli­ance in October 2015, but rev­enue started dwindling from January 2016, with importers blaming access to forex as ma­jor impediments.

They ‘finished’ me with charms, and left me blind – Actress Maryann Apollo details her sufferings