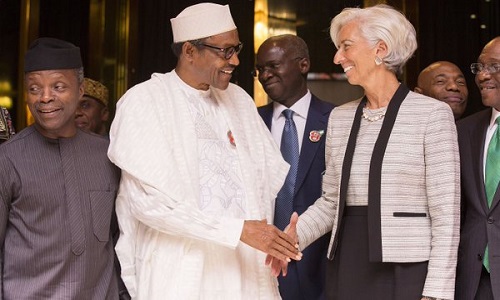 The International Monetary Fund (IMF) has painted a gloomy picture for Nigeria, saying the country’s economy will probably contract this year as energy shortages and the delayed budget weigh on output.

“I think there is a high likelihood that the year 2016 as a whole will be a contractionary year”, said the IMF’s resident representative in Nigeria, Gene Leon.

Mr. Leon, who made this known in an interview in Abuja, noted that while the economy should look better in second half of the year, growth will probably not “be sufficiently fast, sufficiently rapid to be able to negate the outcome of” the first and second quarters.

Nigeria, Africa’s largest economy, for the first time in more than a decade, saw its economy contract by 0.4 percent in the three months through March, as oil output and prices slumped and the 2016 budget, which would have stimulated the economy, was subjected to avoidable controversies.

A currency peg and foreign-exchange trading restrictions, which were removed last month after more than a year, led to shortages of goods and contributed to the contraction in the first quarter.

The IMF asserted that while conditions that hindered growth in the first half of the year, including power shortages, fuel, and foreign exchange, as well as the higher price of dollars on the parallel market, may have been reduced, they still have considerable effect on the economy.

It would be recalled that the Washington-based lender cut its 2016 growth forecast for Nigeria to 2.3 percent in its April Regional Economic Outlook from 3.2 percent projected in February. The World Bank lowered its forecast to 0.8 percent last month, citing weakness from oil-output disruptions and low prices. Last year’s expansion of 2.7 percent was the slowest in two decades, according to IMF data.

“Most people would agree that if you should fix one thing in this country, it should be power,” Leon said. “There is a need to start changing the power equation from 2016, from today, not tomorrow or later”.

He further said inflation will probably continue its upward trend through the end of 2016 however, it is unlikely to exceed 20 per cent.