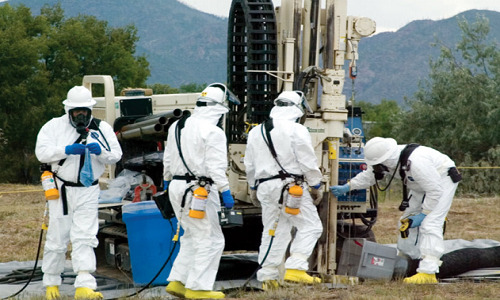 The Commissioner for Solid Minerals, Shanti Sanshi Victoria, yesterday said an expert team from the NNRA, Abuja, had arrived the state to inspect the site of possible radiation.

The commissioner, who rejected assertions that radiation killed several people in five villages in Michika, stressed that the outcome of the scientific tests by the experts would provide a clue to the possible health problems in the area as there was still no proven scientific evidence upon which to draw conclusions.

The Ministry of Solid Minerals Development has established the presence of large deposits of highly valued uranium in six states. They are Cross River, Adamawa, Taraba, Plateau, Bauchi and Kano.

It would be recalled that the Director of Geology at the Adamawa State Ministry of Solid Minerals, Dlama Zira, had during a recent presentation at the Government House in Yola, said several people had died of radiation from uranium deposits in five communities in Michika, namely Garta, Futubou, Himike, Sina-Kwande Nkala and Ghumthi.

Mr. Zira said since the 1950s, villagers had attributed deaths from radiation to evil spirits.

“The people of the affected communities for many years sacrificed hundreds of goats to appease their deity, seeking protection from evil spirit that they believed were causing unidentified illnesses and sudden deaths in the communities. They didn’t know that they were sitting on and drinking water from huge uranium deposits identified by radiation experts as the cause of the illnesses and rampart deaths”, he was quoted as saying during the presentation.