HUSBAND of Chiamaka Okafor, the woman alleged to have chained a 10-year-old girl, Promise Udeh, rescued by the Ogun State Police Command, has made an excuse for his wife’s actions, saying that she has partial insanity. 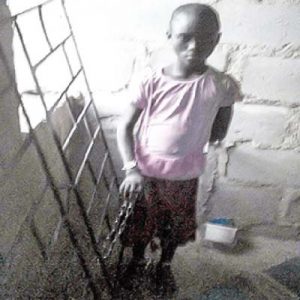 The rescue of Udeh at Alawaye community, Saraki in Adigbe area of Abeokuta came on the heels of the earlier rescue of a nine-year-old boy who was similarly chained by his father, a pastor of a white garment church in Ogun State

Sunday Sun reliably gathered that little Promise was chained by her aunt, identified as Chiamaka Okafor, 32, who accused her of stealing N4,000. Promise is a primary one pupil from Ebonyi State, where her parents also reside. Her aunt was said to have brought her to Ogun State four years ago.

It was learnt that Promise often stole from her guardians and had always been on the run, in a bid to escape punishment every time she allegedly com­mitted the theft.

Although the prime suspect, Chiamaka, a mother of four, is still at large, her husband, Sunday Okafor, was arrested about 6pm on Wednesday by the police and is being held in custody at Ibara Police Divi­sion, Abeokuta, Ogun State capital.

When Okafor spoke with Sunday Sun, he lamented his wife’s neurological condition which, he claimed was respon­sible for her recent dastardly act.

His words: “My wife has mental illness and I have been taking her to different church programmes to seek deliver­ance for her. I have been trying to hide this from people but the truth is that my wife has partial madness and, I have been taking her to different crusades since we got married in 2006. As for Promise, she keeps stealing from us. Times without count, I have been to the police in Adigbe to report her to them but they keep advising me to manage the situation. I can tell you that she has run away from the house up to seven times. Even her teacher in school complains of same thing and punishes her for it. She attends Saint Benedict Primary School, here in Adigbe.”

Okafor, a businessman who sells men’s wear and hails from Ebonyi State, added: “To start with, I never knew she was chained. My wife did. All along, we have been calling on her people in the village to come and pick her, but they kept telling us to hold on till a later date. When I came in the first day and saw that she was chained, I set her loose, but did not know my wife was going to chain her again the next day. I was surprised when I got to the police station and was shown the picture of how Promise was chained. I just want everybody to know that I didn’t chain Promise. It was my wife. I am not the type that intimi­dates children. My biological children and even siblings can testify to that. I think she did it based on the thought that the girl may run away again, although I was never in support of that.”

When Sunday Sun re­porter visited the home of the Okafor in Alawaye, an agrarian community on the outskirts of Abeokuta, it was learnt that worried neighbours alerted the police to the inhuman treatment of Promise.

Speaking on this, 24-year-old Omotoyosi Odu, a student of Tai Solarin University said: “My fiancé lives in that house and I came to visit him on Tuesday, I was in his apart­ment when I heard the cry of the girl. Another woman from the neighbourhood came out too and we both agreed that I should give the girl some food to eat. I did, and when the woman (Chiamaka) came back, she came to me and issued a stern warning to me never to repeat what I had done. I didn’t mind her. The next day, she still chained the girl in the arms and legs. At that moment, the girl saw me and said ‘Aunty, please give me food to eat’. But I was reluctant to heed her request, because the woman (Chiamaka) had warned me to steer clear of the girl. Not too long after, I saw two men approaching our building and immediately, I sensed that they were policemen and that was how they arrested everyone they could lay their hands on and took us to Adigbe Police Station.”

Another neighbour, Taofeek Adebayo, said: “I learnt that the girl has always been mischie­vous. She steals from the house and the next thing she does is to run away from home. The last time she ran away, she was found at Ita Osin. I think the family had to tie her so that she won’t run away again.”

A kinsman of the suspect, who spoke to us on condition of anonymity gave a rather cultur­al insight into the incident. He said: “My dear journalist, let me tell you something. You see, in Igboland, it is a stigma to the entire family to have a mad person in the family. That may make the family member to be ostracised from the community and this is the pain that this man (Okafor) has been dealing with. He has since been living with the problem of treating his wife who has partial madness and with that, I think he needs to be pitied and given some consideration.”

Promise at the orphanage

At the Stella Obasanjo Or­phanage in Ibara, where Prom­ise is presently being looked after, the matron of the home, who simply identified herself as Funke declined speaking with Sunday Sun, saying a directive would have to come from the Ministry of Women Affairs, which is the ministry that supervises the orphanage. All efforts to reach the perma­nent secretary of the ministry were unsuccessful as he did not respond to calls put to him.

At the Zone 2 Police Com­mand in Ibara, Abeokuta, Acting Police spokesman, Abimbola Oyeyemi, while confirming that Chiamaka was still at large added that her hus­band was in police custody and investigation into the incident was ongoing.

He said: “Our men at Adigbe received information that a 10-year old girl was tied hands and legs to a burglary proof in an uncompleted building. Upon mobilising our men, the girl told us that her aunt did that to her on the allegation of stealing N4,000. We consider this as an act of wickedness because in the first instance, the girl is a minor. The girl wouldn’t have taken up stealing if not that she was being starved because it is starvation that makes little children take to stealing. Some parents would say they are go­ing to discipline their children by starving them, not knowing that such would only push them to stealing. The woman has been on the run but, her husband was arrested and has been helping us in our inves­tigations. The Commissioner of Police, Ahmed Iliasu, is not happy at all with the whole situ­ation. Barely a week ago, a boy was rescued from chains under the guise of wanting to cast out an evil spirit from him. The CP has issued a stern warning to residents that such acts of wickedness won’t be tolerated. It is barbaric and unaccept­able. Now, the CP has ordered a manhunt for the woman so that others in her shoes will learn a lesson. As soon as we conclude our investigation, they (suspects) would be charged to court,” Oyeyemi said.