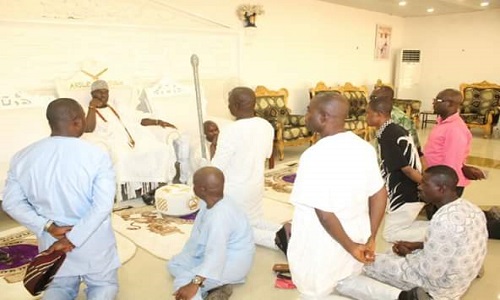 Embattled former Deputy Governor of Osun State, Senator Iyiola Omisore, has denounced the Chairman of the Peoples Democratic Party, PDP, in the state, Soji Adagunodo, for leading a delegation of party chieftains to beg the Ooni of Ife, Oba Adeyeye Ogunwusi (Ojaja III) on his behalf.

Adagunodo last Wednesday led some PDP leaders to the palace of the Ooni to beg him to forgive Omisore for failing to pay homage since his enthronement last December.

The delegation also pleaded with the Ife monarch to use his goodwill to assist Omisore to get out of the detention of the Economic and Financial Crimes Commission, EFCC.

The Osun PDP chair pledged to personally bring the former deputy governor to the palace upon his release to make his ways straight with Ooni Ogunwusi.

Reacting to the visit, a close ally of the detained politician, who doubles as Publicity Secretary of the PDP in the state, Mr. Diran Odeyemi, said described the action of Adagunodo as tantamount to mockery and pretense.

Odeyemi, who made this known in a statement on Sunday, said that “When EFCC came after Omisore, it is logical to assume that Adagunodo group will be happy that their ‘enemy’ is now out of the scene and away from their sight.

“It is also likely that the open display of sympathy and latter-day affection may not be genuine. How can we explain the sudden love for a man you so much hate while in freedom? Their actions and utterances may be ‘Oju aye’ (eye service.)”.

The statement added that, “In their attempt to register the group as supportive of the man they despise, they started crying more than the bereaved, running around to nowhere and with no justifiable reasons for their actions and utterances.

“In Omisore’s case, they cannot be a good advocate to defend his course. It is bias and double standard. For Adagunodo, it is a dangerous game. Head or tail, his intention can never stand the test of absolute sincerity.

“Why going from pillar to post over a sensitive matter still under investigation? You can only plead when confronted with evidences of guilt not prior. This is why Adagunodo’s plea to the Ooni of Ife on behalf of Omisore is a strange strategy that can be viewed as a further attempt to nail Omisore by his enemy posing as his friend.

“One may also be right if you call it a ‘back door political coup’ to dent Omisore’s image. It is a mockery visit for a bad mission under pretense”.

Odeyemi noted that although the Ooni did not give the PDP chairman and his followers the normal respect he always accords his valued guests, he stated that the monarch used the opportunity to further vent his anger on Omisore.

“Oba Ogunwusi was presented a veritable opportunity to stylishly vent out his subtle anger on Omisore. Kabiyesi in his wisdom complained of not being visited by Omisore. His prayer for Omisore is loaded and more or less sounded neutrality in his matter. It is normal and expected. Kabiyesi scored a good goal from a loose ball passed to him by Adagunodo’s group”, the Osun PDP spokesman added.