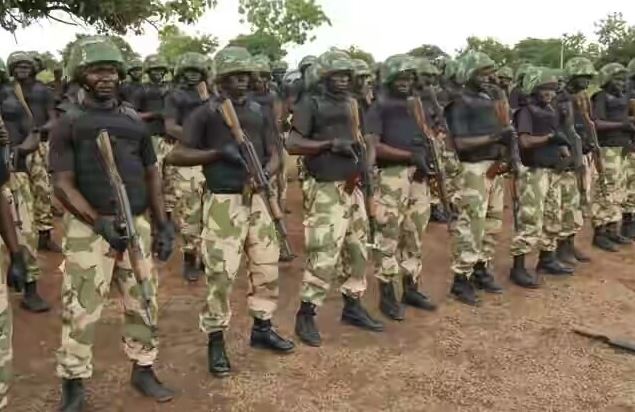 There was pandemonium on Thursday in the Arepo area of Ogun State and some part of Lagos State after the military bombarded the base of suspected militants in the states.

The PUNCH learnt that scores of militants were reportedly killed in the joint military operation which lasted for more than one hour.

A source said the military attacked Fatola, the base of the militants, adding that houses around the area were shaken by the impact of bomb explosions on the Ijaw militants.

He said, “There has been a lot of commotion. The Nigerian Air Force bombarded Fatola, in Arepo, which is the base of the militants. They are shelling the place with fighter jets. Some soldiers also surrounded the area to make sure that if any of the militants should run out, they would be gunned down.”

A resident said people in the area had started fleeing their homes due to the bombardment.

Another resident in the Imushin area of Ogun State told our correspondent that two aircrafts were involved in the operation, adding that only one base of the militants was attacked.

He said, “An aircraft had actually been surveying the creek for the past three days. But a second one joined this evening around 6pm. All we heard was a sudden bomb blast released from the second aircraft. But it appeared that some of the militants had fled into the bush. There are four major bases of the militants in the creek and they are led by two men- OC and Agbala. If the military can get these two people, then they would have succeeded in clipping the wings of the militants.”

A community leader, who claimed to have spoken with one of the officers, said, “The military officer said residents should not panic because it was a military exercise. I also gathered that the casualty figure was high and that a lot of the militants had been killed.”

The Director, Defence Information, Brig. Gen. Rabe Abubakar, confirmed the operation, saying it involved the army and the navy.

He said, “The military only conducts its routine operation for the purpose of denying the vandals and other criminal elements from causing terror in the area. The operation, codenamed, Operation Awatse, was initiated by the defence headquarters to dominate the area with a view to flushing out all manners of criminals including militants and saboteurs. The operation involved the joint forces of the navy and army and it has been successful.”

She said, “The Nigerian military and policemen from the Lagos and Ogun commands are part of the operation. We are sweeping through the waterways where we share boundaries to end the activities of the militants. It is a continuous exercise and we cannot tell the number of casualties.”

The acting Police spokesperson, ASP Abimbola Oyeyemi, promised to call back our correspondent, but he had yet to do so as of press time.