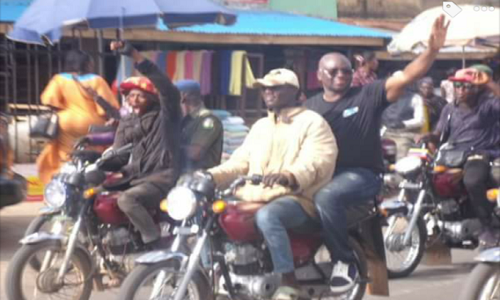 Governor Ayodele Fayose of Ekiti State has said the protests against him by opposition and its allies will only make him more popular and attract more sympathy to his government from the people.

The embattled governor, who spoke on this month’s edition of his monthly media chat, ‘Meet Your Governor’, which was broadcast by major electronic media last night in the state, said anybody that confronts him is fighting against God, who he said put him in the position he currently occupies.

Fayose also dared the Economic and Financial Crimes Commission (EFCC) to come out with statements from former National Security Adviser, Col. Sambo Dasuki (retd) and former Minister of State for Defence, Senator Musiliu Obanikoro that he collected arms cash from them.

He accused the All Progressives Congress (APC) of using the opportunity of being the governing party to intimidate him and muzzle the opposition.

He also quoted some portions in the Bible to substantiate his position that those fighting him are fighting God.

The governor described the APC leaders and other interest groups that trooped out earlier in the day to protest against him as “people who have no sense and dancing ridiculously before the people” adding that even if they continue their protest every day for the next one month, it meant nothing to him.

Fayose said: “Is it because APC is now in control of the Federal Government that they are causing this distraction? Those who were in office before me must also be investigated by the EFCC because the petitions to that effect are before them.

“For them, it is war every day; if it is not government, they will try to bring down the government and that was what they did in 2006. It is only if it was not God that brought me here that will make them to succeed, it was God that made me governor.

“All these useless rallies will be making me more popular; all their rallies against me will make me to get more sympathy from the people. Calling Fayose ‘ole’ (thief) on the streets means nothing to me and the people.

“You can hold your protest for the next one month, they will only continue to ridicule themselves because Ekiti people have given me their mandate. Those fighting me are fighting God.

“When PDP was controlling Federal Government, they never used the Police or DSS to harass and intimidate people”.