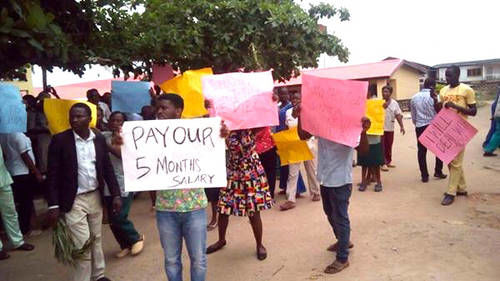 One month after declaring an indefinite strike, organized labour in Ondo State on Thursday evening suspended the industrial action.

The decision to go on strike was sequel to the state government’s inability to pay workers their six months’ salaries.

However, after four days of extensive deliberations between leaders of organized labour and the government held at the Government Cocoa Conference Hall in Akure, the state capital, the strike action was suspended.

At the meetings, the government was represented by the Head of Service (HoS), Toyin Akinkuotu; Commissioner for Finance, Yele Ogundipe; Attonery-General and Commissioner for Justice, Eyitayo Jegede (SAN); and the Special Adviser to the Governor on Union Matter, Mr. Dayo Fadahunsi.

On the workers’ side, they are being represented by the Chairmen, Joint Negotiating Committee, Oluwole Adeleye; Nigeria Labour Congress (NLC), Bosede Daramola; Trade Union Congress, Soladoye Ekundayo; while the State Controller, Federal Ministry of Labour, Mr. O.M Folayan served as the mediator.

It was resolved on the fourth day of the meeting that workers’ salary arrears would be paid by government according to the available fund.

A copy of the resolutions taken at the meeting and signed by the aforementioned officials reads: “that January 2016 salary be immediately paid in full to all staff in mainstream, Parastatals, HMB, TESCOM and State Pensioners while all local government staff and primary school teachers including their pensioners be paid February 2016 in full.

“That in addition to above, March 2016 salary be immediately paid in full to primary school teachers and local government staff on level 1-10 in view of the fact that the available funds cannot pay all categories of workers at that sector.

“That February 2016 salary be further paid in full to health workers in HMB; that Judiciary workers be paid two months’ salary January and February 2016 in full; that the State Oil Producing Areas Development Commission (OSOPADEC) be paid February to April in full.

“That government should agree in principle to buyback all outstanding corporate/individual loans of workers on compilation of details by labour.

“In view of this, a seven-man committee has been constituted comprising representatives of the organised Labour and government to negotiate with the affected banks.

“That government should set up efforts towards increasing its Internally Generated Revenue (IGR) to complement its dwindling allocations from federation accounts as a way of meeting its financial obligations, especially in prompt salary payment.

“That no worker should be victimized, retrenched or retired on account of any of the strike action and government should progressively interface with the organised labour regarding the implementation of this agreement and other matters incidental thereto”.