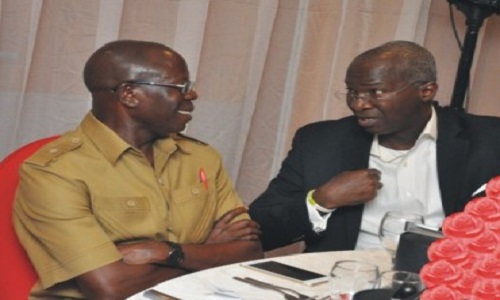 Governor Adams Oshiomhole of Edo State on Tuesday pleaded with the Federal Government to fix the failed portions of the Benin-Ekpoma-Auchi-Okene highway, which he noted, has become a nightmare for motorists plying the road.

The governor, who made the plea when the Minister of Power, Works and Housing, Babatunde Fashola, visited him in his office, said the last government which worked on the road left it far worse than they met it.

He said: “Right now, I have difficulty going home to my village because of what your predecessor did. I have tried to explain it and it is important we explain it, not because anybody believes in what they call blame game, but the truth is that if the road wasn’t touched at all, it would have been better than it is now, and it was better.

“I did argue then that what they were doing was going to create more problems. The truth is that they have left the road worse off than it was before the haphazard dualisation which is now creating a lot of problems”.

Gov. Oshiomhole stressed that if people of the state found out that he did not talk about the road during the Minister’s visit, they would assume he is not taking good advantage of his personal relationship with Mr. Fashola.

“So, they need to know that I have drawn your attention, and I know you know what to do, to see what the appropriate agency under your Ministry can at least make the road passable especially during this rainy season”, he pleaded.

The governor also used the occasion of the visit to congratulate Fashola on his performance so far, expressing confidence that no one was better placed than the former governor of Lagos State, considering his experience and exposure, to deal with what he said are complications in the power sector and other challenging sectors in the Ministry of Works and Housing.

“We will always remember you in our prayers because it is not easy. People expect change in a twinkle of an eye for something that went under for more than 16 consecutive years.

“If we remember that at one time we expected power to be fixed in six months. That is where we are coming from, but Nigerians in their tension at the moment, those are issues they hardly remember. But we must remind them there are no quick fix solutions to a complicated matter such as power.

“I am sure you have also advised the DISCO people that in a moment like this, the service provider needs more patience, because the truth is that the people expect light. Whether you have to be a miracle worker to provide that light is not their headache. And also, they need to accelerate the amount of time available within which they must deliver meters so that payments should not be based on estimates. I think that is the real soft point in the entire process”, Mr. Oshiomhole added.

Speaking earlier, the Minister said, “Let me say how delighted I am to be here for our monthly power sector meeting hosted this time by the Benin Electricity Distribution Company (BEDC), and in the process I also used the opportunity to visit power assets within the State, as is the tradition to get a feel of what is going on.

“So, I have been to the Azura Power Project that is under construction, and I am happy to note that the project is still on course. The project is also impacting on local communities in terms of economic opportunities for the locals, and also complying with environmental standards of construction. Needless to say that the project is on course and on schedule, and I hope it stays so because we are expectant that the additional power will add to our stock of incremental power to the State”.