Facts have emerged on how some secondary school girls were tricked into prostitution by a suspected human trafficker, Abigail Nweke Alo, who promised to take them to Lagos.

Findings by Vanguard revealed that the four schoolgirls, Charity Nkwogor, Felicia Nzuworgar, Angela Benjamin amd Patience Williams all between 17 and 18 years old, were forced into prostitution by the woman who owned a brothel in Calabar business area.

The girls said to all be from Okun and Vandeikya local government areas of Benue state, were said to have been taken from their homes in January to work as sales girls in a supposed drinking spot in Lagos, but they narrated how Abigail, the woman they referred to as Chairlady, ended up using them as sex workers. 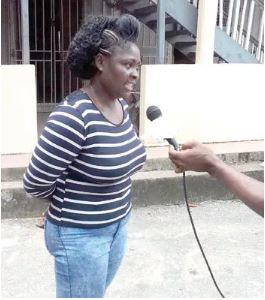 Speaking on her own plight, Felicia explained: “I was selling oranges in our market in Okun when she tapped me on the shoulder and I turned thinking she wanted to buy oranges but she told me she had a business in Lagos and wanted me to follow her. I did not know what came over me. I just followed her without even telling my parents and friends where I was going.”

On her own part, Patience, an SS2 student Vandiekya, stated that she was plating a friend’s hair in fron of her granny’s house (where she lived) when a motorcycle rider in the neighbourhood informed her that someone from Lagos would like to employ her ton in a beer parlour.

And Patience said she replied thus: “I told Mike that I was still in school and could not go with the lady and that she should look for someone else. But instead of looking for somebody else, Mike went and brought the lady and when she looked into my eyes, I simply went inside and packed my clothes and followed her without waiting for my grandmother who went out to come back.”

Angela was on her way from school when she reportedly met Chairlady who told her that she had a beer parlour on Lagos where she could work for her. The young student subsequently followed Abigail into the bus where other girls were said to be waiting.

On their way to the expected Lagos, the girls reportedly stopped in Enugu, passed the night in the house of a man who was said to have seven wives.

It was this man who allegedly gave the girls concoctions to drink, after which the youngsters were warned never to attempt escaping otherwise, their private parts would rotand they would eventually die.

Felicia explained further that, “The man took us into his medicine hut and gave us the concoction to drink and, when we refused to drink, he beat us. He told us that if we went out without drinking, we will die. After we drank, he said that if we ran away from ‘Chairlady’, our private parts would rot and we will die.” 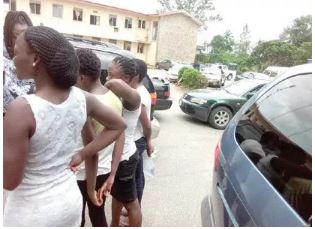 “We got to Calabar in the night and when I asked ‘Chairlady’ if this was Lagos, she said yes.”

At the brothel where the girls allegedly lodged the next day, they said they boxer shorts from their boss and immediately started to ‘hustle’ for men just like their counterparts whom they met there, but those who refused were badly beaten by Chairlady.

According to Patience: “We arrived Calabar in the night and, the next morning, she collected our phones and brought boxer shorts to us that we should wear and, when we asked her where the drinking parlour was so that we could start work, she said we should hustle like other girls were doing by sleeping with men and, when we refused, she beat us up mercilessly.”

“Everybody in the hotel was afraid of her because she was their boss and, if anyone dared to challenge her, she will send the person out of the place.”

Angela recalls that they had to start sleeping with men after some days because their ‘boss’ would not stop beating them and also denied them food, adding: “You can see marks on our bodies because of the beating we got.”

They revealed how their average daily encounter was with 20 men and how they got N500 to feed daily after the Chairlady had collected all the money they made from sleeping with the men.

Patience lamented: “It was very painful when we started. Everyday we slept with an average of twenty men for N500.00 each and, because we were young and new, men would line up and wait for us till about 12 midnight when the hotel closes and then ‘Chairlady’ will come in and collect the money and, since she used to count the condoms she was giving us, if you did not give her all the money, she will beat you mercilessly.”

The woman was said to have guys who conducted the search in the girls’ rooms and bodies and ensured that no money was hidden and having collected their phones since their arrival in Calabar, the Chairlady denied any one of them access to any where outside the brothel as Angela and Charity, two of the girls who had attempted to escape, were beaten silly.

Recounting her ordeal after trying to escape, Angela said: “When I tried to run away, she brought a soldier and a policeman who were her friends who beat me up and poured tear gas in my eyes and, because of that, I became very sick and could not stand up for many days.”

The girls confessed to have been hypnotised by the lady, whom they reportedly obeyed and followed immediately she touched their shoulders. But despite the claims and confessions of the schoolgirls, Abigail, the alleged trafficker, denied ever bringing the girls to Calabar for prostitution business.

The woman who claimed to be from Ebonyi state, insisted that she was arrested by operatives from anti-human trafficking unit of the Cross River state police command out of jealousy. Speaking on the incident, the police spokesperson in Cross River, John Eluu, confirmed that the suspected human trafficker will face the full wrath of the law, while warning young girls to be wary of people promising them lucrative jobs in Lagos without proof.

The suspect has now been charged to court on allegations of kidnap and for engaging in prostitution. Recently, a 28-year-old mother of two was arrested in Nigeria’s federal capital, by the Special Intelligence Response Team of the Inspector-General of Police for allegedly turning six girls into prostitutes.

According to police reports, the six girls aged from 19-22 namely Chidinma Amakwe, Blessing John, Nancy Azubuike, Chiamaka Eze, Amarachi Chinedu and Beauty Ndulue, had been found locked up in a room where they had been promised N200,000 after six months if they become commercial sex workers.