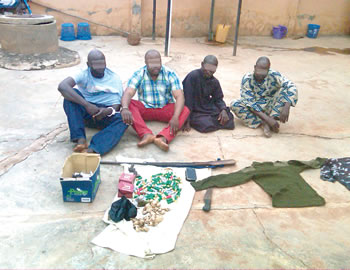 Suspended chairman of National Union of Road Transport Workers (NURTW), Saki inter- state branch, Alhaji Kazeem Aderibigbe popularly known as Kazeem Iwo have been arrested by a team of Operation Burst comprising operatives from the Nigerian Army, Department of State Services and Nigeria Security and Civil Defence Corps for illegal possession of arms, ammunition and weeds suspected to be marijuana.

Alhaji Kazeem was arrested at about 2:00a.m. at his residence in Challenge Area, Saki, on Saturday alongside his personal guard, Mr. Akeem Kolapo a.k.a. Stainless, his night guard, Mr. Nasiru Oyebisi and the NURTW Ajegunle motor park cleaner, Mr. Ibrahim Olubuse.

One single barrel gun, a locally-made pistol, a cutlass, cartridges, wraps of marijuana, a number of syringes and needles, as well as a military cardigan and a police camouflage uniform were among the items recovered from his house.

The Commanding Officer of 244 Recce Battalion, Asabari Barracks, Saki, Major Ibrahim Mohammed while parading the suspects before newsmen at Operation Burst’s office along Oje-Owode road, Saki, said that the operation was as a result of intelligence reports gathered that the Kazeem Iwo led-faction of NURTW was threatening to cause mayhem in Saki following his removal by the local government security committee headed by the council chairman, Mr Kareem Kasali Adegoke.

It was gathered that the suspects had however, been taken to Operation Burst’s headquarters in the state capital for further investigation.