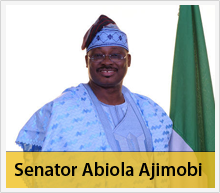 Oyo State Governor, Senator Abiola Ajimobi, has lauded the Japanese Government for committing about N2bn to the construction of classrooms, renovation and equipment of 30 public primary schools across the State through its donor organisation, the Japan International Cooperation Agency (JICA).

The Governor was effusive with his commendation for the gesture during the symbolic handing over of one of the completed schools, St. Luke’s Demonstration School, Molete, Ibadan, on Monday.

On hand to witness the colorful ceremony were the Japanese Ambassador to Nigeria, Mr. Sadanobu Kusaoke; Chief Representative of JICA, Nigeria Office, Mr. Hirotaka Nakamura; a Director in the Federal Ministry of Education, Mrs. Opeyemi Ariba, who represented the Minister, Malam Adamu Adamu; top officials of the State Government; and Olubadan of Ibadanland, Oba Saliu Adetunji.

Ajimobi stressed that the present administration believes in Public-Private Partnership in education management in its aspiration to raise the standard of education and secure the future of the young generation.

The Governor said, “Our administration has anchored the progress of education on joint efforts of the government and the general public in view of the prevailing financial challenges in the country. As we already know, education is a social service that cannot be ignored by all.

“We appreciate the government of Japan for helping us to develop our future leaders by this gesture and by extension, in assisting us to realise part of our lofty goals of providing a conducive learning environments for our students.

“This gesture, no doubt, will improve the standard of education in our state and set a new target for the government and people of Nigeria. Let me also thank my dear brother, Mr. Bobby Ologun, for not forgetting his roots, though living abroad.

“He did this for us because he has education. Education is the largest industry in Oyo State. Let me again urge our school children to see people like Ologun as their role model and shun the type of brigandage they displayed recently.”

The Governor explained that project, which was spread across 30 schools in 19 Local Governments of the State, comprised 231 classrooms, 3900 pupils’ desk and benches, 209 teachers’ tables and chairs, as well as 231 blackboards and 218 toilets.

Ajimobi added that the government had also earmarked substantial fund to the education sector in the 2016 appropriation bill for the construction and renovation of classroom buildings, as well as for the provision of furniture for pupils and teachers.

In his remarks at the occasion, the ambassador said that the project would enable teachers to concentrate on productive teachings, which, according to him, would in turn improve the quality of output from the schools in the State.

He commended the State Government for placing high premium on education, without which, he said, that the project would not have been completed in record time.

Kusaoke said, “We want to appreciate the Government of Oyo State for putting education first among other priorities, despite the dwindling resources accruable to the State. Apart from these school projects, we are also engaged in rural water supply and training for government officials in the State.

“The support of the State Government, among other factors, has assisted us to concentrate, without let, on the completion of this project in record time. The JICA is working with other developing countries in so many areas and we are proud of our achievements in Nigeria.

“The completion of this project brings the total number of classrooms constructed in the education sector in Nigeria to 1, 038 classrooms and 999 toilet booths since December 2014 till date. We hope the project would assist in improving the quality of basic education across the State.”

The envoy explained that each of the newly-constructed classrooms was intended to accommodate 65 pupils.
The representative of the minister and the Executive Secretary of the State Universal Basic Education Board, Mrs. Lucy Eniola, said that the provision of additional classrooms in the public primary schools was in line with the FG and state’s administration policy to partner international agencies to restore the lost glories of the country’s basic education.