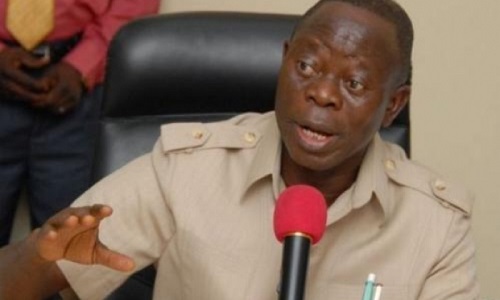 Governor Adams Oshiomhole of Edo State yesterday confirmed that the political differences between him and his deputy, Dr. Pius Odubu, was over just as he declared that the Peoples Democratic Party, PDP, will never “resurrect” in the state again.

Speaking at a reconciliation meeting of the APC in Benin, the state capital, Oshiomhole expressed joy that the party was going into the September 10 governorship elections united, adding that the party was fully prepared to inflict defeat on the PDP.

It was learnt that nine of the governorship aspirants of the APC, including representatives of Dep. Gov. Odubu were present.

The meeting also presented the opportunity for the party to mend fences with some of its chieftains, including Gentleman Amegor, Chief Mathew Ehigie and others, who were suspended prior to the June 18 governorship primaries of the party.

While addressing the party members, Oshiomhole said “Let me appreciate my younger brother with whom I have entrusted power not because we were the best but because God chose to use you to give us that favour. That is Pius Egberamwen Odubu, the Deputy Governor of Edo state. It doesn’t matter how the result went, I want to publicly appreciate him and I assure him I regard him as a brother”.

Oshiomhole, who said he would be leaving office in some few months’ time with his head up high, expressed appreciation to the party members and people of the state for their support.

“I am celebrating the fact that someone will take over my job, do I look tired, if I am not tired and I am not looking tired why I should I be celebrating my imminent retrenchment from office. I am celebrating it because, when I was elected I knew it is renewable only once. That is the beauty of democracy that you pray not for extension but finishing well and finishing strong, we have finished not the less.

“I want to therefore thank you for all the support that each and every one of you here and millions of our people who are not here, party members and no party members, men and women, young and old that you have extended to me over the past ten years. My case has been a thing of miracle with God using every one of you to perform the miracles. I can never thank you enough.

“They are planning now how to come back only those who died like Christ and only one born of a virgin woman can resurrect like Christ, those who died in the political scene can never be resurrected. PDP died in Sin and they remain buried and they can’t resurrect certainly not in our life time”, he stated.