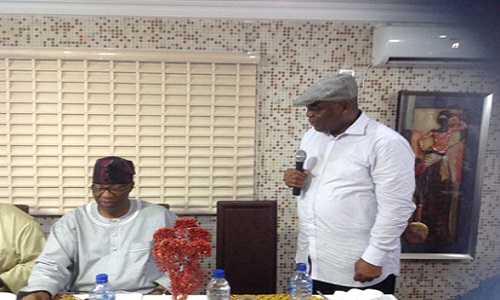 A former Governor of Ogun state, Otunba Gbenga Daniel has announced his withdrawal from the race for the national chairmanship position of the Peoples Democratic Party, PDP, at the national convention billed for August 17 in Port Harcourt, the Rivers state capital.

A group known as the PDP New Era had endorsed Mr. Daniel for the coveted seat earlier in the week but the ex-governor said he will be supporting media mogul, High Chief Raymond Dokpesi for the post instead.

He stated this when he hosted Dokpesi and his team at Conference Hotel and Suites, Sagamu, Ogun State.

Mr. Daniel hinged his support for Dokpesi on the latter’s ability to rebuild the party and make it the darling of Nigerians.

While acknowledging that he has been under pressure from stakeholders to contest, OGD as he is fondly called, said he will drop his ambition to support Dokpesi.

“I have known High Chief for more than four decades and it beholds on me that I should support him whenever he is seeking any position”, he said amidst applause.

In his response, Chief Dokpesi thanked Otunba Daniel, assuring him that he will not disappoint as he will work assiduously to bring unity to the South West chapter of the party and ensure that PDP wins subsequent elections in the region.

The PDP delegates from Ogun state prayed for him and pledged their support during the convention.