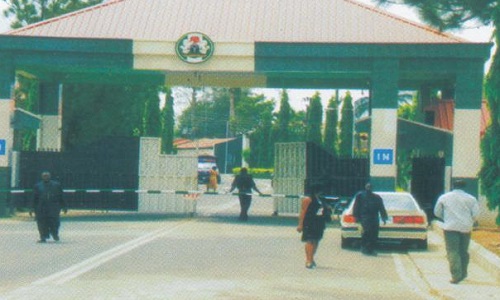 Security around the Abia State Government House in Umuahia, has been beefed up by the police following report of the issuance of Certificate of Return to Uche Ogah as Governor-elect of the State.

The News Agency of Nigeria (NAN), reports that the news, which filtered into the state around noon yesterday, caused anxiety among residents of Umuahia, the state capital.

At the city centre, popularly called Isi-gate, some traders, tricycle riders and passersby expressed happiness over the development.

However, it was a different scenario at the Government House, where political office holders were seen moving hurriedly out of their offices, while workers simply watched the unfolding development with bated breath.

It was learnt that Governor Okezie Ikpeazu, who was on his way to deliver an inaugural lecture at the State-owned University in Uturu, made a quick u-turn to Aba when the news filtered in.

Mr. Ikpeazu had operated from the Government House Liaison Office in Aba since he assumed office on May 29, 2015.

Hundreds of Mr. Ogah’s supporters moved to the Sam Mbakwe Cargo Airport, Owerri, to receive him.

Many other supporters were also seen at the Government House main-gate in anticipation of his inauguration. (NAN)