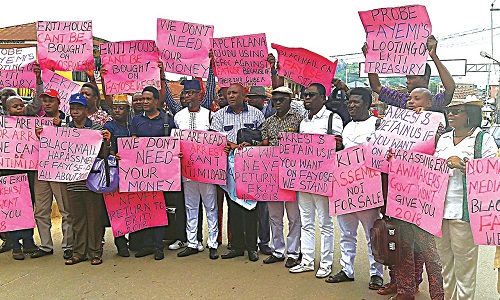 There is palpable tension in the Ekiti State House of Assembly following plans by the Police to prosecute at least nine of its members for alleged certificate forgery.

Credible sources revealed that various security agencies have conducted investigation on several petitions against 17 members of the Ekiti Assembly for forgery of their school certificates and other related crimes.

One source said that the Department of State Services (DSS) has established a prima facie case against nine of the lawmakers, who would soon be charged to court.

“We have submitted our report to INEC and the police. I think the police are awaiting the recommendation of the Attorney General of the Federation (AGF) to press criminal charges against the lawmakers. They will soon face prosecution”, the source said.

Another source confirmed that INEC is already in possession of the report conducted on the forgery of the school certificates submitted for clearance by the lawmakers.

Although the Peoples Democratic Party-dominated House of Assembly had cried foul over the forgery case, claiming that its members were being witch-hunted, the source said the police is determined to proceed with the prosecution of those found to have engaged in forgery of their school certificates.

It was also gathered that some of the affected lawmakers made last-ditch efforts at replacing the controversial certificates, but met a brick wall in the unyielding INEC officials.

It was further learnt that aside petitions written by opposition parties on the certificate forgery, some disgruntled PDP members, who were dissatisfied with the party’s primaries, also wrote petitions against the lawmakers.