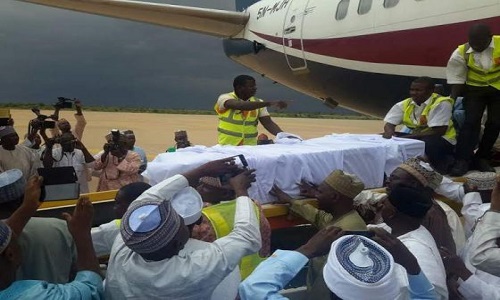 The remains of late Umaru Shinkafi, who died Wednesday at a London Hospital after a protracted illness has arrived the country for burial today.

The remains of the former presidential aspirant and traditional title holder of Marafan Sokoto, arrived Sokoto International airport Friday morning and was received by the state governor, Aminu Tambuwal, immediate past governor of the state, Senator Aliyu Wamakko, Governor AbdulAzeez Yari of Zamfara State and other northern state governors.

A statement issued by a senior counsellor in the Caliphate and Magajin Garin Sokoto, Alhaji Hassan Danbaba, said the Janaza (Islamic funeral) prayer will be held immediately after the Jumaat prayers at the Sultan Bello Mosque, located just outside the Sultan’s Palace in Sokoto.

“Marafa’s remains will arrive Sokoto Friday morning. The Janaza rites will be held after the Jumaat prayers, after which he will be interred at the Hubbare here in Sokoto”, the statement said.