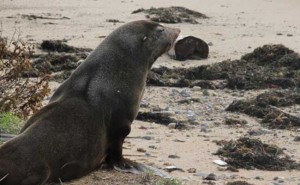 A woman in Australia who wanted to use a toilet at a cemetery got the shock of her life after finding a seal sleeping in one of the toilet cubicles.

This was quite strange as the animal was far away from the nearest body of water.

Parks and Wildlife officials had to be called to handle the situation.

Parks and Wildlife officer Ken Brooks said, “I can only imagine he’s swum up Horsehead Creek as far as Stoney Rise Road and he’s pulled out there, and in the bad weather was just desperate to find somewhere to shelter and found his way here”

Wildlife ranger Matt Jones said it appeared it was not is the best health.

“It’s not real healthy, I’ve seen them better condition,” he said. “Often when we see them come up the estuary is because they’ve been kicked off by a bigger male.”

The animal was sedated, it’s head covered and was carried to the back of a waiting truck.

Two hours later the seal was up and awake and heading back into the sea.