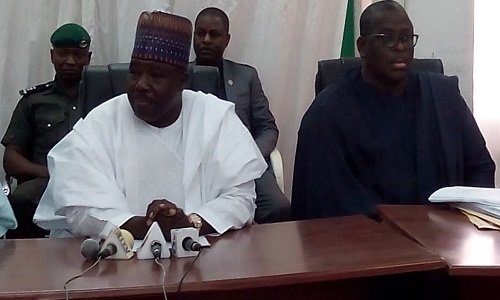 The disputed national chairman of the Peoples Democratic Party, Senator Ali Modu Sheriff, has warned party members across the country to desist from carrying out what he termed “smear campaign” against him by insinuating that Senator Buruji Kashamu is his political god-father.

Sheriff, a two-term former governor of Borno State, said he had “an intimidating political credential” and does not need a god-father to survive.

Kashamu, the senator representing Ogun East District on the platform of PDP, is the most prominent politician from the South-West in the party that has openly stood on the side of Sheriff in view of the leadership crisis rocking the opposition party.

The Ogun PDP, financed by the senator, is also one of the few state chapters of the party that recognizes Sheriff as national chairman.

In a statement by his special adviser on Media, Inuwa Bwala, yesterday, Sheriff said those making such claims could neither succeed in distracting him from moving forward nor pitch him against party members who identified with him.

He said party members and leaders should address issues in their collective quest to find a lasting solution to the leadership crisis that has beset the party, rather than “planting reports” in some sections of the media “alluding that Kashamu is Sheriff’s political god-father”.

The statement said, “While it remains obvious that the said report was part of the mischief and orchestrated smear campaigns embarked upon by some people against the national chairman, we wish to state, for the avoidance of doubt that, he has no god-father in politics and Senator Buruji Kashamu could not have been one.

“We must state that it was most uncharitable for anybody to imply that Senator Kashamu, who, like every stakeholder in the PDP, is highly respected, and who makes inputs towards the progress of the PDP, is Senator Sheriff’s godfather, as nothing could be further from the truth”.

“It is becoming clearer that, the PDP national chairman’s critics have run out of ideas on how to achieve their selfish agenda, hence the resort to blackmail and planting of blatant falsehood in order to distract Sheriff from manifesting his capacity to reposition the PDP”, the statement said.