The Akwa Ibom State Police Command on Thursday arrested four teenage boys who allegedly trade in human parts.
The teenagers were arrested by operatives of the Criminal Investigation Department, CID, when they were reportedly looking for a buyer of a human skull in their possession.

Confirming the arrest to newsmen while parading the suspects – Emmanuel Edet Ikot, 17, from Edeabasi, Oron; Ubong Udong, 18; Bright Effiong Okon, 19 and Okon Ita, 20, from Orukim, before newsmen on Thursday, the Police spokesperson, Delia Nwawe, spoke on behalf of the Police Commissioner, Mr. Murtala Mani, saying the suspects were arrested following tip off. 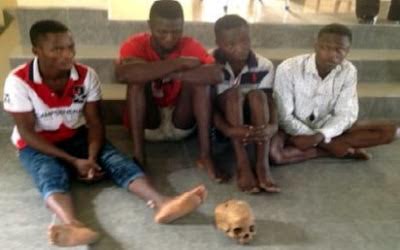 Nwawe said, “They were arrested by officers of the CID of the command in Mbo Local Government Area on receiving an alert from vigilant youths in the area.

“Investigations are ongoing and the suspects will be charged to court soon for the law to take its course.”

Meanwhile, Edet, who is the alleged leader of the group, denied the accusation.