Three persons have been confirmed dead and two others injured after a container fell on a commercial bus in Lagos. 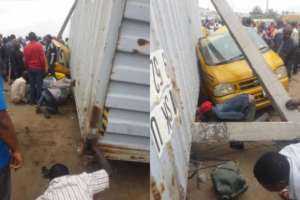 The incident occurred on Wednesday morning at Alakija bus stop on the busy Badagry expressway.

Our correspondent learnt that the collision made the container to fall on the bus, killing three persons on the spot.

Two other persons, who were trapped under the container, were seriously wounded and rushed to hospital by emergency workers.