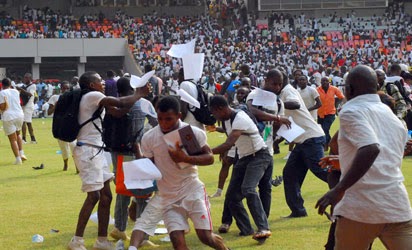 On this day in 2000; Police fire tear gas at unruly fans during a World Cup qualifying soccer game between Zimbabwe and South Africa, setting off a stampede that killed twelve people.
Also on this day in 1987; Mozambique and the Soviet Union rejected the findings of the Margo Commission on the air disaster in which Pres. Samora Machel was killed.  The Commission founded that the accident was caused by an error of the crew and was not lured off course by a decoy beacon as alleged.
On this day in 1985; Chad and Zaire sign an agreement on military co-operation.
Equally on this day in 1971; Some 2 000 men stormed King Hassan’s birthday party in Morocco, killing 100 people in an attempted coup; the king surviveed.

And on this day in 2015; In Nigeria,Suspected cultists numbering over 50 , attacked Gaadi village on the outskirt of Makurdi town razing several houses.
AdvertisementABUJA DOCTOR REVEAL THE UNIQUE WAY TO PERMANENTLY CURE WEAK ERECTION, SMALL AND SHAMEFUL MANHOOD AND INFERTILITY ISSUES WITHOUT SIDE-EFFECTS WITHIN SHORT PERIOD!! DON'T BE A VICTIM!! Click Here for More Details