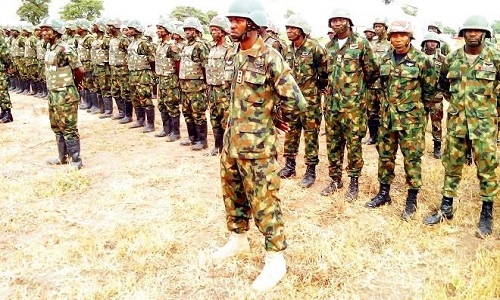 No fewer than 11 suspected armed bandits were killed in a gun battle with soldiers as troops of the 223 Battalion, Nigerian Army, raided their hideouts in Zamfara state on Saturday.

Mr. Usman, a colonel, noted that the troops suddenly turned a simulation exercise into reality when they ran into armed bandits in the Madaka village jungles of Maru Local government area.

Nine of the bandits were killed, while various types of arms and ammunition were recovered.

The full statement by the Army spokesman reads:

“As part of the activities marking the Nigerian Army Day Celebrations (NADCEL) 2016, troops involved in live field training exercise code named ‘Exercise HARBIN KUNAMA’, have intensified patrol of the various forests in Zamfara State. It is in line with that troops of 223 Battalion while on patrol encountered armed bandits at Madaka village, Maru Local Government Area in which they killed 9 armed bandits and recovered 3 AK-47 rifles, 2 AK-47 rifles magazine, 3 rounds of 7.62mm (Special) ammunition, 1 machete and 24 motorcycles.

“In a related development, troops have also raided a bandit camp at Gangamai village in Dansadau Local Government Area. During the raid there was an exchange of fire between the troops and the armed bandits.

“Here, the rustlers and armed bandits fled on sighting the approaching troops abandoning 85 cows, 37 sheep and a donkey. Similarly, another patrol team also carried out a raid on an armed bandits and cattle rustlers’ camp at Gobirawan Kwacha where they killed 2 armed bandits and recovered a machete”.