Renato Sanches age saga is over as Hospital records confirm his Date of Birth. 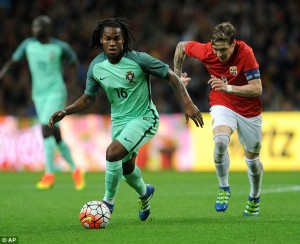 ​The midfielder has enjoyed a breakthrough season like no other, progressing at Benfica before shining as Portugal’s star player at this summer’s Euro 2016.

However, with such a development, question marks have subsequently been raised as to the age of the young man which ​have finally been put to bed by Portuguese newspaper Jornal De Noticias.

The doubts that have overshadowed Sanches’ rise have previously been reported to have caused animosity between two of Portugal’s biggest clubs, Benfica and Sporting Lisbon. 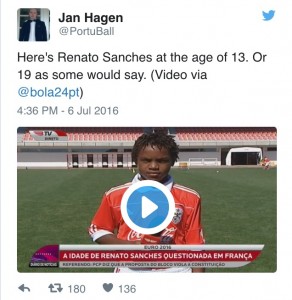 Amid interest from Manchester United, Sanches signed for German champions Bayern Munich for a fee that could reach as much as £63m. A figure that would make him the most expensive teenage transfer in the history of the game.

Having scored on two occasions during his debut season at Benfica, Sanches has gone on to establish his name on the European stage in France with numerous impressive displays.

The Portuguese starlet scored against Poland and became the youngest player to win a man of the match award in European Championship history.

The newspaper report has found that Renato Sanches is 18-years-old after being born on 18th August 1997. Although it has since transpired that his birth went unregistered for a further five years, until 2002.

The birth certificate was produced by the Hospital de Amadora-Sintra and provides absolute confirmation that Sanches is the youngest ever player to reach a European Championship semi final. 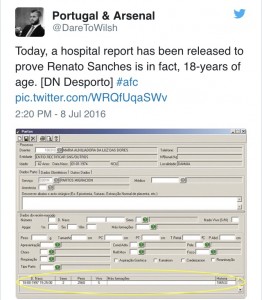 With the saga now concluded, Sanches is expected to line up against France in Paris on Sunday as Portugal look to win their first major tournament.

This story first appeared on 90 minutes.