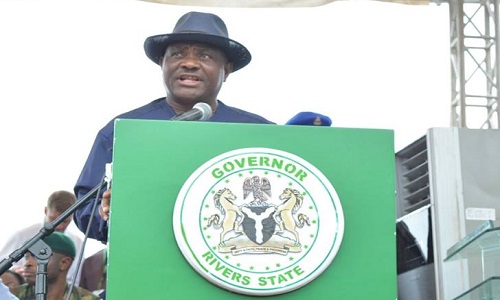 The Rivers State Governor, Chief Nyesom Wike has called on Niger Delta youth to use their talents to promote development in the region.

Speaking when he received the international award winning Port Harcourt Male Ensemble at the Government House, Port Harcourt, Wike said that positive contributions of youth are vital to the revival of the fortunes of the Niger Delta.

He said the Port Harcourt Male Ensemble, by their exploits, have proved that youth can channel their energies to useful purposes outside of violence.

“I feel so happy and delighted that we still have young men who have not wasted their youth on vices.

“The youth should emulate the Port Harcourt Male Ensemble, which has promoted the Niger Delta and Nigeria at international competitions. We will support the group to further promote the region”, the governor said.

Wike charged members of the Port Harcourt Male Ensemble to always serve as agents of positive change, who challenge other youth to embrace a positive lifestyle.

He approved the group as the official choir of the Rivers State Government House, adding that they will perform in all forthcoming events in the state.

The governor also approved the release of a coaster bus to ease the movement of the group to perform across the country as he assured the group that his administration will support them in hosting the music festival in March, 2017.

Earlier, the Director of the Port Harcourt Male Ensemble, Mr Bob Amuye, had said the all-male group was formed to reach out to the world through music ministrations.

He stressed that the group has been using music as a tool for the promotion of peace, unity and youthful contribution to societal development.