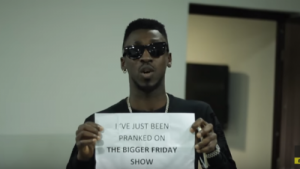 The role of the prankster was played by MTV VJ Ehiz. On the episode, Orezi’s manager is embarrassed by a young man who claims Orezi’s car scratched his.

Orezi tried to play the role of a mediator between his manager and the young man only to be shut down.

Watch his reaction below;