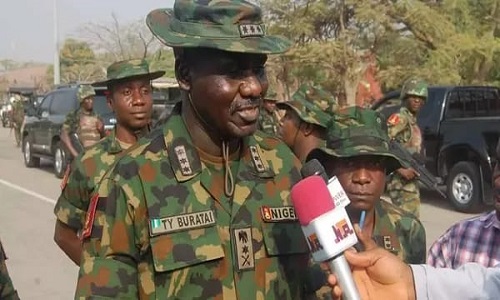 The Chief of Army Staff, Lt.-Gen. Tukur Buratai, yesterday warned that the Army will deploy full military action if the Niger Delta Avengers (NDA) and other militant groups in the Niger Delta reject the federal government’s call for dialogue.

The federal government has ordered a suspension of all military operations in the restive Niger Delta region to allow for a window of dialogue with militant groups following months of bombings of oil and gas installations by the Avengers and other militants.

Gen. Buratai gave the warning yesterday after inaugurating the two-storey administrative headquarters complex, Olympic-size swimming pool and two other projects at the 2 Brigade of the Army in Port Harcourt, Rivers State.

The inauguration was attended by Rivers Governor Nyesom Wike, who was represented by Secretary to the State Government (SSG), Chief Kenneth Kobani, and the immediate past Commander of the Brigade, Brig.-Gen. Stevenson Olabanji, now the Commander of 3 Brigade, Kano.

The projects were started during Olabanji’s 11-month stay at the 2 Brigade.

The befitting administrative headquarters and other projects were started in January by the former commander, with the foundations laid by Gen. Buratai, and completed within six months.

The swimming pool was constructed for intensive training of army officers and men, in view of the peculiar environment they are operating in with many of them unable to swim.

Speaking through the General Officer Commanding (GOC) 82 Division, Enugu, Maj.-Gen. Ibrahim Attahiru, the Army Chief said: “Government is still committed to dialogue (with Niger Delta militants). Whereby this cannot go on, then there could be resort to other means. The non-kinetic means has always been the source first, before government can recourse to the kinetic means (dropping bombs and using bullets, using lethal force/full military action/war or killing people).

“So, there is the need for the Niger Delta Avengers to see reason and dialogue with government.

Attahiru declared that the army expected that the projects would translate to greater performance of soldiers, stressing that attention should be devoted to maintenance of the projects.

In his remarks, Mr. Olabanji descried the commissioned projects as the highpoint of his stay as commander of 2 Brigade, Port Harcourt.

The former 2 Brigade Commander recalled that some soldiers died due to their inability to swim, which necessitated the construction of the Olympic-size swimming pool – in line with the vision of the Chief of Army Staff.

He expressed optimism that the projects would enhance the capacity and capability of soldiers.

Brig.-Gen. Olabanji revealed that Gen. Buratai chose the site of the headquarters building of 2 Brigade and followed the progress of work till completion.

He also urged the army personnel in 2 Brigade to extend the same level of support and loyalty he enjoyed to the new commander.