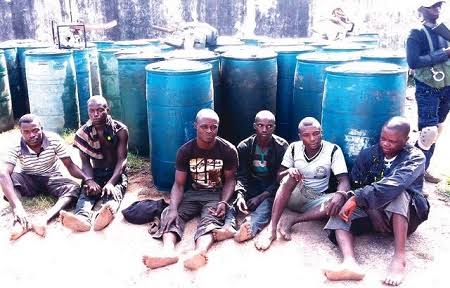 The nefarious activities of pipeline vandals around Lagos State have been drastically reduced and the hoodlums decimated, the Nigerian Army has said.

Outgone Commander, 9 Brigade, Brig.-Gen. Bulama Biu stated this while handing over to his successor, Brig.-Gen. Sani Mohammed at the command’s headquarters on Thursday.

Gen. Biu noted that despite the myriad challenges the command had to grapple with when he took over, the loyalty and commitment of the officers and soldiers led to their overcoming them.

The outgone commander, who was posted to Calabar, Cross River State to head the 13 Brigade, expressed optimism that his successor was a worthy officer who will take the command to greater heights.

“We had issues of pipeline vandals, miscreants and other vices in Lagos but we have been combating them.

“Through Operation AWATSE, we have been able to tame activities of vandals considerable. Although, it’s not an issue to be completely eradicated within a short time. But I can say we have done very well in fighting them.

“I advise my successor to be committed and ensure troops remain professional. He should ensure they operate within rules of engagement and uphold human rights”, said Biu.

In his remark, Mohammed, who described the security challenges confronting the nation as unpalatable, declared his commitment to continue from where his predecessor stopped for the greater good of the nation.