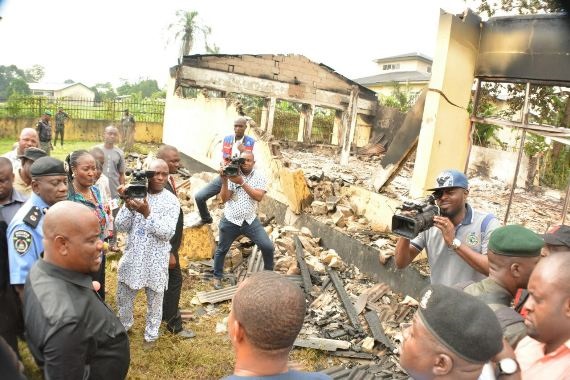 Governor Nyesom Wike has declared that those responsible for bombing the Independent National Electoral Commission, INEC’s office in Bori-Ogoni, the traditional headquarters of Ogoniland, are the same politicians from the state who petitioned the commission, asking it to shift the rerun elections on security grounds.

The INEC office in the area, which is the seat of Khana Local Government Area of the state, was bombed by unknown persons on Friday less than a week to the July 30 inconclusive rerun polls in Rivers.

Addressing journalists after inspecting the burnt section of the office, Governor Wike said the arson should not serve as an excuse for the elections to be postponed again. He expressed regrets that politicians, who are afraid of the rerun elections, would go to the extent of burning down public facility to convince INEC that the rerun elections should be shifted.

Wike, however, pointed out that no election materials were deposited in the building at the time the arsonists struck, adding that the burnt section only served as a hall for collation of election results.

He said: “Those who burnt this office were not ready for the elections. They don’t want INEC to conduct the elections because they know that they don’t have the chances of winning.

“They want to use the issue of security to justify the request for postponement. If not, INEC has not brought election materials to this office. What they have done is to scare INEC. 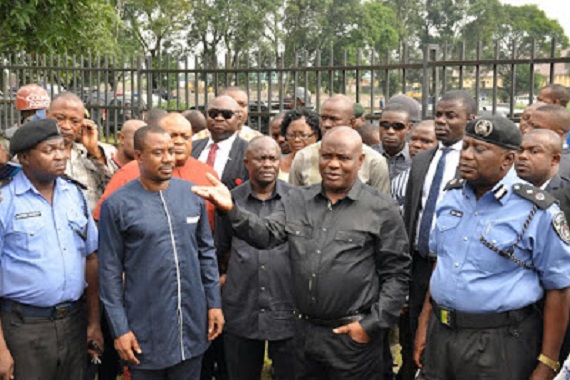 “For us, we are not surprised. We know this is what they have planned to do”.

He advised INEC not to be deterred by the arson, urging it to go ahead with the elections as scheduled.

The governor also directed the security agencies to fish out the perpetrators of the crime just as he advised politicians not to see elections as a do or die affair.

Wike added that “We will make sure that this does not dampen the spirit of INEC. I have directed the Caretaker Committee Chairman of the Local Government Area to immediately rebuild the burnt office”.

The governor said that the state government will provide an alternative office for INEC to conduct the rerun elections in the area, adding that the people have been duly mobilised and are ready to cast their votes come July 30.

Earlier, Divisional Police Officer (DPO) for the area, Stephen Okunade, said there was no security at the INEC office at the time of the arson. According to him, the lone private security guard was absent when the perpetrators struck.

Mr. Okunade added that the private guard, who has been detained, only returned while the office was burning.

Gov. Wike was accompanied on the visit by the Deputy Commissioner of Police, Mr Uche Anozie and top government functionaries.