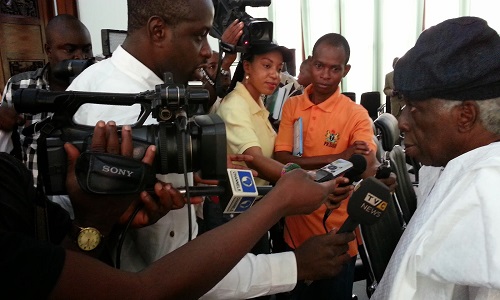 The Second Republic governor of old Oyo State, in an emotional statement Thursday, disclosed that his 52-year-old daughter had a history of mental illness and several efforts by the family and other well-wishers to moderate her erratic behavior, have been fruitless.

Describing statements credited to Kemi or KOO as she fondly calls herself as “utterly irresponsible”, “libellous” and “repeatedly painful”, the octogenarian tendered an unreserved apology to everyone who had been attacked by his daughter.

“I would like to apologise without reservation to all persons affected. I hope and pray they would graciously accept the apology”, he wrote.

Mr. Olunloyo, who was a governor under the banner of the defunct National Party of Nigeria (NPN), said even her family is not safe from Kemi’s public attacks.

He said: “There seems to be a curious pair of writers, an Aboderin resident in Ireland and Kemi Olunloyo, who sometimes curiously act separately and sometimes in union. Some of their most unfortunate victims are their half siblings.

“Others of higher status in the society (like) ex-president Obasanjo and quite recently, clergy men with large respectable following, such as the General Oversea of Redeemed Christian Church of God, Pastor E.A Adeboye, a brilliant fellow mathematician, an inspired Bishop Oyedepo, the inimitable Reverend T.B Joshua, all learned men.

“She includes me, her father. All four of us she dubs ritualists. Of course, none of us, as far as I know, is anything of sort. She has gone so far as to accuse us of various sexual crimes and gone too far to give social media itself a very dubious name, in term of uncontrolled freedom to assault others”.

The former governor, a mathematician, recalled that Kemi’s “erratic” behaviour had put her in trouble in Ireland and in the United States, and it once took the intervention of late Ooni of Ife, Okunade Sijuwade, to bail her out of jail.

“Of Late, in the last four weeks or so, she had had the audacity to pass irrelevant and hopeless comments on one of our national talented artists, Prince Jide Kosoko, whom I admire so much, calling him a black widower as he has unfortunately lost three wives.

“I had thought at 52, Kemi will further train her mind and cease to be an embarrassment to herself and member of her nuclear, extended family and to the general public. I thank pastors and psychiatrists like Dr. Lasebikan, who had gone to great lengths at their own personal cost to restrain her from excesses and recklessness. I dissociate myself entirely form her conducts and statements.

“She must accept responsibility for her actions and utterances as well as the consequences. My condemnation is total and not in any instance defensible. My position is absolutely clear. She has gone too far and needlessly so”, he wrote.