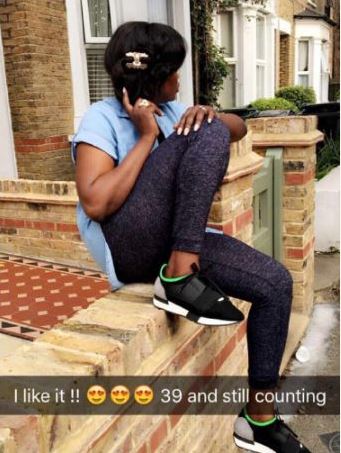 Actress Funke Akindele is now enmeshed in an age controversy after conflicting claims emerged about her real age.

The actress turnesday 24, August and marked the occasion privately in London with her musician lover, JJC Skillz.

While the actress claimed that she is age 39, a conflicting claim on her Wikipedia said that she is now 40 years old. According to the public online biography, the actress was born Akindele Olufunke Ayotunde on August 24, 1976 in Ikorodu, Lagos State, Nigeria. In another twist, a Nollywood producer who does not want to be named has insisted that the actress is about 44 year old.

“As at when she starred in I Need To Know, Funke’s age was already more than the teenage character which she portrayed. She is not 39 or 40 as she claims, she is 44 years old. I have been around for quite a while to know this for sure. Age falsification and reduction is a trend in Nollywood and indeed every sector of the society, this is not the first time it is coming up,” revealed the filmmaker.

Explaining why movie personalities false their ages, a brand expert, Ikechukwu Orji said that corporate organizations are more disposed to associating with celebrities who are younger due to their youth segment appeal. “In the corporate sector, we prefer to work more with celebrities with youth appeal and age plays a factor in this,” Orji said.