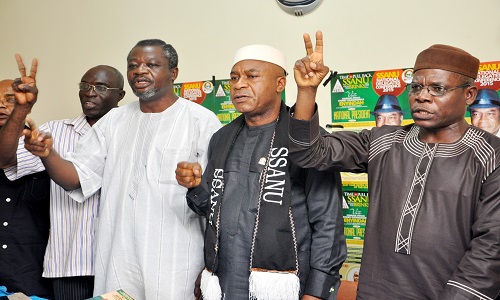 The Senior Staff Association of Nigeria Universities (SSANU) has accused Pro-Chancellors and Vice Chancellors of Nigerian universities of corruption and running the nation’s ivory tower aground with their fraudulent activities, diversion of funds and awarding shady contracts.

The Union, which made this known at the end of its National Executive Council meeting yesterday, asked President Muhammadu Buhari to beam his anti-corruption searchlight on the Vice Chancellors and the governing council of the universities if the anti-corruption battle is to succeed.

In a communique signed by its National President, Comrade Samson Ugokwe and National Public Relations Officer, Salaam Abdussobur, SSANU said the government must take urgent steps to check the rot and sleaze in the ivory tower, which they said have become haven of corruption being run by greedy, inept, incompetent and rapacious administrators.

The union hailed the efforts of the government in fighting the hydra-headed monster of corruption, which it noted has crippled the economy, embarrassed the country in international circles and caused untold pains and hardship to Nigerians.

It also asked the Federal Government to do more, by shifting its attention from the political class, and beaming its searchlight on the Nigerian university system.

The communique said “NEC noted various allegations against Pro-Chancellors, Vice-Chancellors and Councils, involved in fraudulent actions, illegal appointments, shady contracts, diversion of funds, and other corrupt practices and agreed that the level of rot and sleaze in our University system needs to be checked, as our ivory towers are now havens of corruption being run by greedy, inept, incompetent and rapacious administrators.

“The Honourable Minister of Education, must put the issue of corruption in the front-burner of his engagements, investigate all reports brought to his attention and not spare any University official found indicted.