A portion of Apapa Bridge, which connects Apapa Central Business District (CBD) to Lagos Island and Lagos-Ibadan Expressway via Ikorodu Road, has caved in, thus putting its structural integrity to question, investigations by THISDAY have shown.

By implication, the bridge, whose construction started under the regime of former Head of State, Gen. Yakubu Gowon and was completed by Olusegun Obasanjo when he was military head of state in the 1970s, is a disaster waiting to happen. 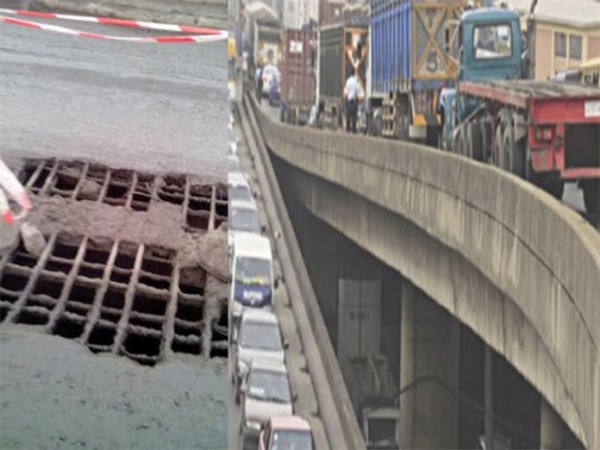 A check on the bridge and its land area by THISDAY depicted grave conditions that regularly cause intractable gridlocks, traffic crimes, and has become an environmental eyesore in the Apapa CBD.

As THISDAY observed, the concrete connecting the bridge to Wharf Road opposite A.G. Leventis is completely eroded to the extent that the iron rods are protruding, causing the portion to be cordoned off with ‘Danger Signs’ to notify motorists of the looming danger and prevent accidents, especially for the articulated trucks the ply bridge and road everyday.

Consequently, the condition of the bridge and its land area makes vehicular movement from Apapa CBD and commuters experience unimaginable nightmare.

Apart from the caved in portion, THISDAY checks revealed that some of pillars holding the bridge have suffered structural defects due to fire incidents that have worn off the concrete parts and exposed the iron rods. It is no wonder that the bridge shudders and sways menacingly whenever heavy trucks that ply the bridge are on standstill.

THISDAY observed that right from the land area to its first-two segments, the bridge is littered with large portions that are already depressed due to the articulated trucks that it carries daily.

About five hundred metres to the tip of the bridge further showed that its land area had become corrosively undulated while other parts dotted with depressed portions have now rendered the road almost impassable.
It was observed that the asphalt overlay from the front of the Flour Mills of Nigeria (FMN) Plc complex to the Ijora Seven-Up ramp on the bridge that leads to Lagos Island and Iddo is completely worn off, thereby making the portion unduly full of potholes.

The condition of the bridge and its land area when exiting Apapa now forces most motorists to divert to the service lane beside A.G. Leventis, from where they connect to NNS Beecroft and turn left before Marine Beach Road to connect to Mobil Road, against traffic.

Commuters into and out of Apapa who spoke to THISDAY on the development, all said the depressed portions of the road and bridge were a major threat to the national economy.

A recent report showed recently that Nigeria loses N1.825 trillion annually to Apapa’s traffic congestion. It further showed that the condition of the bridge poses a daunting threat to human lives and properties due to high accident rate, which has risen on that section of the road/bridge.

The prevailing condition of the bridge showed the failure of the federal government to implement the recommendation of a technical committee it set up with the Lagos State Government in 2012 to address the challenges threatening lives and businesses in Apapa CBD.

The committee, which was co-chaired by the former Lagos deputy governor, Mrs. Adejoke Orelope-Adefilure and former Minister of Finance, Dr. Ngozi Okonjo-Iweala, came up with 12 recommendations directed at resolving the diverse challenges of traffic gridlocks, environmental abuse and insecurity in Apapa.

The federal government was represented on the committee by Okonjo-Iweala, the then Minister of Works, Mr. Mike Onolememen, his former transport counterpart, Mr. Idris Umar and Chairman of the Ports Monitoring Committee, Mr. Sylvester Monye while the Lagos State team included the deputy-governor, former Commissioner for the Environment, Mr. Tunji Bello and his transportation counterpart, Mr. Kayode, among others.
THISDAY learnt that the technical committee duly submitted its report to the National Economic Council (NEC) in the second quarter of 2012 for necessary action.

However, since its submission, the federal government has been silent on the report, which clearly identified areas of intervention by the federal and state government.
THISDAY gathered that the failure of NEC to adopt and implement the recommendations of the technical committee has aggravated the situation in Apapa.