There was serious pandemonium this evening at Abule-Ado bus-stop in Lagos after two separate factions of ‘area boys’ in the area clashed. The hoodlums who were armed with machetes, bottles, charms and other dangerous weapons, fought each other -injuring themselves in the process in the free-for-all brawl…Even the presence of security personnel (both army and police) could not stop the bloody fight. 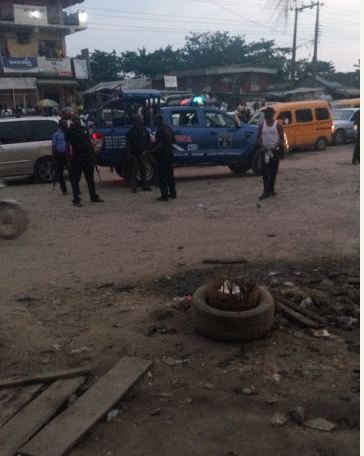 According to a live witness, soldiers stormed the area -shooting sporadically in the air in order to stop the fight but the area boys still stood their grounds. The soldiers had to leave after few hours of ‘ginger’… The policemen had to resort to peace talk between both parties. A heavy traffic gridlock has overtaken the area as motorists and other road users are seeking alternative routes to get to their destinations. Policemen have sealed the main road leading to Abule Ado extension (the side where the other hoodlums stay)

Below are more photos showing aftermath of the clash.