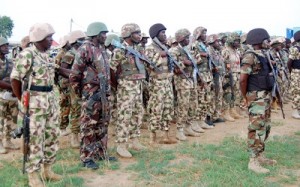 The Nigerian Army has launched an operation to flush out all insurgents and other criminal elements in Bauchi State forests.

According to the Commander, 33 Artillery Brigade Bauchi, Brigadier General Abraham Dusu, the Chief of Army Staff, Gen. Yusuf Buratai, had directed the Brigade to carry out the operations after a series of complaints by residents of the areas about the movement of unidentified people with arms in the forests.

Dusu said, “Residents said that people carrying guns had been sighted in the forests or migrated to the state from Sambisa forest as a result of operations there.

“For the past two days operations by our officers and men have been going on.

“We are going to enter all the forests in the state and any other location within the state where there are reports of bandits, kidnappers and cattle rustlers. We have adequate troops and I will also tell you that we have air support to flush them out.”

The commander said the operations would be extended to every nook and cranny of the state as well as the dense Yankari and Balmore forests.

He urged the residents of those areas to remain calm and report any suspicious movement to the authorities.

Dusu told journalists that the Nigerian Army had the support of other security agencies in the state in the operation.

“The Commissioner of Police in the state gave me his word that the police will give us the necessary support we may need,” he said.

Hamma Misau, a senator representing Bauchi Central, had recently raised an alarm about insurgents setting up a base in some forests in the state, and called on the Federal Government and the Chief of Army Staff for intervention.