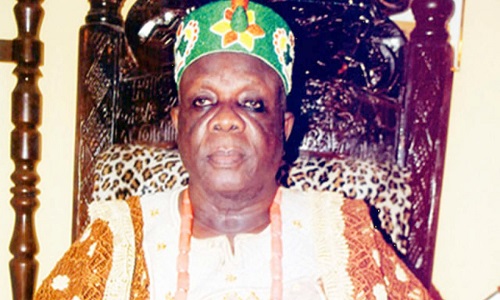 Governor Akinwunmi Ambode of Lagos State on Sunday reiterated his administration’s capacity and will-power to combat all forms of crime and criminality, saying that it would not relent in its efforts until the state is rid of criminal elements.

He addressed a press conference on the safe rescue of the Oniba of Iba, Oba Goriola Oseni, who was seized three weeks ago by suspected kidnappers.

Ambode disclosed that in the last few weeks, there had been a coordinated onslaught by security agencies in the state against vandals and kidnappers, under the code name ‘Operation Awatse’, adding that the operation would continue until their activities were completely stamped out.

Speaking through the State’s Attorney General and Commissioner for Justice, Adeniji Kazeem, the governor said the kidnap of an Oba in Yorubaland was a sacrilege and a complete desecration of the cultural values of the Yoruba race, which according to him, must not go unpunished.

He said, “The arrest of these suspects is a clear warning to criminal elements that we value and cherish our Yoruba tradition and will leave no stone unturned to ensure that it is protected from violation by those who have desecrated our values”.

Two suspects – Isaiah Ododomu and Toba Forejo – who were arrested by the police, confessed to the crime, saying nine persons were involved in the operation that led to the kidnap of the monarch.

Mr. Ambode, who hailed the police and other security agencies for their all-round efforts in securing the release of the Oba and effecting the arrests of Messrs. Ododomu and Forejo, said the 74-year-old traditional ruler has since returned safely to his palace.

“We are also pleased to announce that two of the kidnappers have been arrested and are here for everybody to see. The kidnappers are also prime suspects in the murder of two persons killed during the kidnap and they will face the full wrath of the law”, the governor said.

Speaking during the briefing, the state Commissioner of Police, CP Fatai Owoseni, said the sustained pressure and hot chase given to the kidnappers, led to the rescue of Oba Oseni.

Responding to inquiries as to whether ransom was paid, Mr. Owoseni said: “We have always reiterated that it is not about whether ransom was paid or not. If it is about ransom, suspect will not be arrested and what I will say is that the pressure by the Lagos Command and the Special Response Team of the Inspector General of Police from Abuja, the combined efforts and pressure paid off and the most important thing is that Kabiyesi is in his palace”.

The police boss added that the monarch was hale and hearty as at the time of his rescue, saying that he met personally with the monarch and debriefed him on his state of health.

Besides, Mr. Owoseni debunked insinuation that the state government abandoned the monarch to his fate during the period of the ordeal.

He said: “As to whether the State Government did something or not, if you are seeing suspects being paraded, the security agencies are apparatus of government and that is to say that the government has worked very hard in order to get Kabiyesi liberated.

“What we want to do is to also thank and appreciate the calmness and the understanding of the family who in the process of getting Kabiyesi out of the hands of the kidnappers have been very cooperative with us in order for us to get Kabiyesi out hale and hearty.

“No matter the amount of money that is put to fund security, the United States has all it takes, France has all it takes but till tomorrow, you are still hearing of people being killed in Malls or whatever.

“In France, some people went to church to go and kill a priest, so there is no society that you can completely eradicate crime. But for you to know, the logistics and wherewithal that the government has given all the security agencies in the State also contributed to the arrest that has been made.

“All I want to say is that criminals should also know that whatever has been done, they will not go unpunished. As of now, investigation is still on and you can be assured that all the people that took part in that operation will be arrested and they will face the full wrath of the law. We will not reveal much so as not to jeopardize ongoing investigation”, the CP assured.