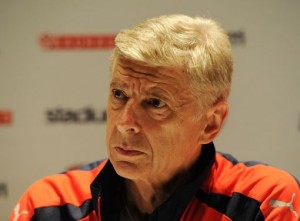 Reports indicate Arsene Wenger has finally given up on his pursuit of Riyad Mahrez after Leicester turned down a £30million bid for their attacking player.
Arsenal will now try and land Manchester City outcast Wilfried Bony, according to the Daily Star.

The Ivorian is out-of-favour with new manager Pep Guardiola and could be the man that answers Arsene Wenger’s call for new striking power.

It is believed that Arsenal could launch a bid totalling as much as £30million for the 27-year-old.

Bony is reportedly considered by Gunners chiefs as the best possible option, given that he is one of only a few strikers available right now.

Meanwhile, defender Gabriel Paulista is facing up to two months out with an ankle ligament injury which he sustained in last Sunday’s pre-season game against Manchester City.

Wenger is determined to land a new defender by Friday with the Gunners going into their season opener against Liverpool on Sunday without a senior centre-half.