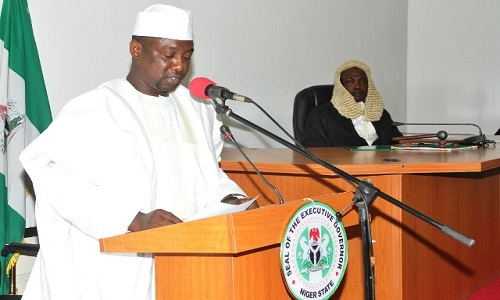 Governor of Niger State, Alhaji Abubakar Sani Bello, has issued seven days ultimatum to individuals or groups with illegal firearms to surrender them to the appropriate authority in the state.

He issued the ultimatum in a state broadcast on Saturday in Minna, the state capital.

Gov. Bello spoke on the recent clash between security operatives comprising soldiers and airmen and suspected gunrunners and armed bandits in some communities in Bosso Local Government Area of the state.

At least 11 security operatives were killed and one soldier still missing while eight of the attackers were said to have been killed and 57 others arrested as a result of the clash.

According to him, the state will no longer accommodate individual or groups in possession of firearms and will not be a safe haven for criminals.

Bello decried the proliferation of small arms and light weapons in rural communities, invasion of some villages by cattle rustlers, kidnappers, bandits and armed robbers.

“We must rise now to fight this menace, and to achieve this task successfully, we must pay attention to what happens in our homes, villages and communities.

“We must make security of our environment our business by reporting any suspicious movement or activities around us to security agencies.

“The sad and emerging violent culture in our various communities is not a true reflection of of who we are or what we stand for, and belief in as a people.

“We cannot at this crucial point in our development as a state allow minor differences that can be mutually discussed and resolved to bring us to daggers drawn at one another”, he said.

He also used the opportunity to reiterate the ban on motorcycle operations from 7 p.m.to 6 a.m in the state capital and major cities, adding that he had ordered “a stop and search operation” in the state.

Bello, however, called on the security agencies to exhibit professionalism in the discharge of their constitutional responsibilities.

He urged them to intensify efforts to sustain inter-agency intelligence gathering for peaceful co-existence.

He commended Alhaji Umar Faruk, Emir of Minna, for ensuring return of normalcy to the affected communities.

The governor assured that relief materials would be povided to the affected families of the injured and displaced persons. (NAN)