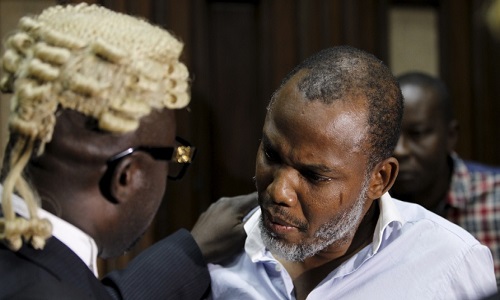 The separatist group, Indigenous People of Biafra, IPOD, on Sunday debunked reports in the media that its incarcerated leader and Director of Radio Biafra, Nnamdi Kanu, had agreed to negotiate with Federal Government for his release.

Mr. Kanu, who has been in detention since last October, is currently standing trial for treasonable felony and has remained uncompromising in his stance in the face of death – the penalty for treason.

However, in a sudden twist of events, the IPOB leader’s lawyers – Ifeanyi Ejiofor and Amoebi Nzelu – last Friday addressed a press conference in Abuja stating that Kanu was ready to hold talks with the Federal Government as a political solution to his travails.

The lawyers also disowned the Niger Delta Avengers and Movement for the Emancipation of the Niger Delta, saying their client had no connection, contact, ties or any kind of relationship with members of the militant groups.

But in a statement weekend, IPOB said condemned the comments credited to the lawyers, saying they were “made without consultation”.

“As a result of these unsolicited and unguarded utterances, the defence team has been sacked and will be replaced”, the group said in the statement by Emma Nmezu and Dr. Clifford Chukwuemeka Iroanya.

It added: “The IPOB leader wishes to state categorically that the only thing we are open to is negotiation that will lead to modalities and processes to restore Biafra and avert further hardships on the people of Nigeria who have been under bondage since his kidnapping and illegal detention.

“The Niger Delta Avengers arose because of the inherent injustice in Nigeria as manifested in the disregard to the rule of law when Buhari refused to obey court order to unconditionally release our leader, Nnamdi Kanu.

“We spoke the mind of our leader when we stated for record purposes that IPOB and Niger Delta Avengers share the same ideology of freedom for Biafra.

“Anybody publicly dissociating IPOB from Niger Delta Avengers is a mortal enemy of IPOB family worldwide under the leadership of Nnamdi Kanu.

“Let it be known that as long as Buhari and Daura continue to tamper with Nnamdi Kanu’s defence team through bribery, inducements and intimidation, IPOB will keep on changing the team.

“For the records, the press conference by the now-sacked legal team was about bringing to public knowledge the foolishness of the Department of State Services (DSS) in bringing treasonable felony charges against our leader and the lack of evidence thereof.

“The press conference was NEVER about negotiations because should negotiations start, IPOB will notify the world about it. Right now, we are not negotiating and will not negotiate until existing court orders ordering the release of Nnamdi Kanu are obeyed.

“In the interim, Ifeanyi Ejiofor will continue to act as lead counsel until other counsels are appointed who will not sell their souls to the devil. Biafra or death!!!”