Home National News Odd News Bride Runs Away From Wedding Venue After Realising Groom Is Not A...
Facebook
Twitter
WhatsApp

This is the trending story of an hilarious moment when a new bride reportedly took to her heels from the venue of her wedding after realising that the man she was about saying ‘Yes, I do’ to was not who he claim to be. 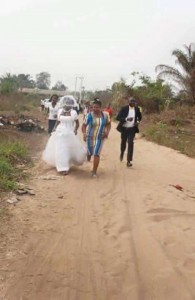 The incident which was said have happened in Eket Local Government Area of Akwa Ibom State, according to a Facebook user who posted the picture of the runaway bride, the groom reportedly told the woman he met on social media that he worked with a giant oil company, Chevron Nigeria Plc.

The man had allegedly posted on his social media accounts that he was a staff of the multinational oil and gas company, but on the wedding day, the bride discovered that he had nothing to do with the oil company and decided to abandon her wedding.

But she could not go far enough as the groom and other guests gave her a hot chase and were able to persuade her to return back to the venue of the wedding. 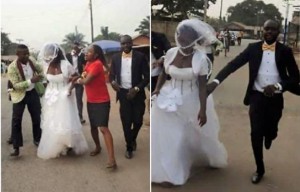