Drivers driving the Bus Rapid Transit (BRT) buses resumed work on Wednesday after Tuesday’s protest over delay in payment of their salaries, the News Agency of Nigeria (NAN) reports.
This came just as Primero Transport Services Ltd., the operators of the scheme, said that it lost no less than N50 million during the one day protest.
The management, led by Mr Fola Tinubu, however, expressed its apologies to its teeming commuters for the pains the strike brought on them.

NAN reports that the drivers had also protested against alleged unfavourable working conditions of service. 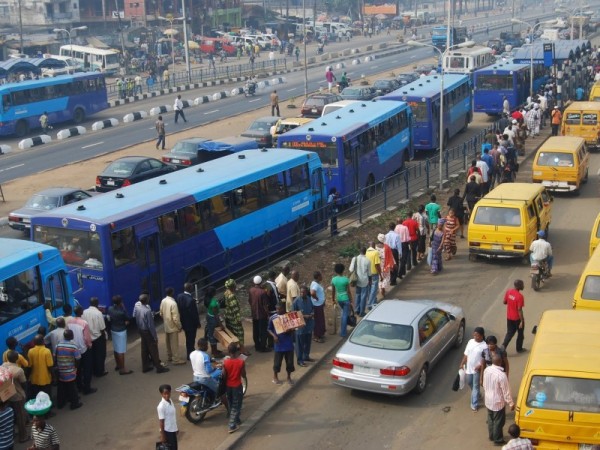 A correspondent of NAN that visited the Majidun Depot of the company in Ikorodu on Wednesday morning saw some of the drivers preparing their buses for the day’s operations.

He, however, saw some of them loitering outside the depot.

He noted that the atmosphere changed positively when Mr Fola Tinubu, the company’s Managing Director, rode in the first bus from the depot to its Ikorodu Terminal.

NAN reports that at the terminal, Tinubu reassured commuters that the buses had resumed their regular services.
After then, the first set of buses rolled out of the depot at 7.15 a.m.

NAN reports that the scheme, being operated by Primero Transport Services Ltd., provides bus services along dedicated lanes in the metropolis with Lagos Island to Ikorodu and vice-versa enjoying a great boost.

NAN also observed that policemen from the BRT Monitoring and Enforcement Task Force were seen manning the main entrance to the premises.

Tinubu, after the ride told NAN that the buses had resumed operations.

“As you can see, the buses are back on the road, we have rolled out over 100 buses and we are pushing more out.

“So all I can do is to appeal to residents of Lagos to bear with us, it was circumstances beyond our control; it is over now, our buses are back on the road.’’

He said that drivers who were yet to report for work could do so, saying “the terms of employment have been spelt out; if you are comfortable with it you can come and work.

“If you are not, you can look for employment somewhere else; it is not by force for us that somebody has to work for Primero.

“So if they are happy let them come in, I don’t have grudges against anybody.

“As you can see, all the ones (drivers) that were out yesterday are back at work now, so if the few that are outside want to come they can do so.

“I am not putting a deadline on it right now, he said.’’

Tinubu said that the company lost no less than N50 million when commenting on the financial loss from the strike.

“Though, a minimum of N50 million was lost by the company, residents of Lagos bore the pain the most during the one-day strike embarked upon by the drivers.

“We’ve not even quantified it yet; but we are looking at least N50 million.

“But more importantly, what about all the people (commuters) that wanted to go to work and couldn’t do so, or were late for work, contract.

“How do you quantify the sufferings that people went through yesterday; so, let us forget Primero’s loss.

“All I can do is just beg them (commuters) and apologise,’’ he added.

He said the company would continue to provide quality services to its commuters, as well as create conducive working environments for its members of staff.

“In fact, this event (the strike) will re-energize me, and I will intensify my efforts, not only to make the busmen happy but also to provide a better service for Lagos residents,’’ he said.

Tinubu also expressed the company’s appreciation to Gov. Akinwunmi Ambode of Lagos State and the Lagos Metropolitan Area Transport Authority (LAMATA) for resolving the issues that precipitated the strike.

“The governor has been very good on this issue; I thank him so much.

“He is one of the people that made the resumption possible because he cares a lot about the commuters.’’

NAN reports that less than 20 minutes after the buses resumed operations, hundreds of commuters heading for various destinations had thronged the Ikorodu Terminal to board them.

Some of the passengers told NAN that they were excited with the resolution of the impasse between the BRT management and its protesting drivers.

Mrs Folashade Adebiyi, a businesswoman, said, “It’s indeed a relief that the drivers had called off their strike; yesterday (Tuesday) was hellish for some of us.

“I want to thank all the parties involved in the resolution and ensured the buses returned to the road.’’

Another passenger, Mr Mathew Obinna, urged the management of the BRT buses to ensure such a lull did not reoccur.

NAN reports that Primero, which began operations in November 2015, has 434 buses in its fleet and more than 2,000 staff.